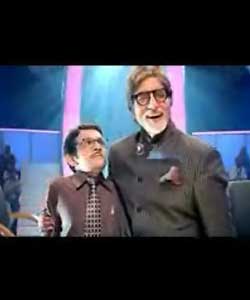 Sony Entertainment Television launched the much anticipated advertising campaign for the most popular game show on Indian television Kaun Banega Crorepati 2011. The anticipation primarily is based out of huge expectations from this year's campaign after the unprecedented success of last year's KBC campaign – sweeping all national and international awards, proved to be the most successful advertising campaign by walking away with 6 ABBY's and 4 at Promaxbda, making SET the highest awarded media brand.

Speaking on the campaign, Danish Khan, Senior Vice President & Marketing Head, SET said, "This year the challenge was to take the campaign and the thinking forward and build upon the hugely successful KBC campaign of 2010 - 'Koi Bhi Sawaal Chota Nahin Hota'. This year also the campaign retains that distinct KBC flavor, while we take the thought forward. The thought "Koi Bhi Insaan Chota nahin Hota" – is rooted in yet another popular belief of our society that 'everybody inherently has capability to achieve something extra ordinary'. Hence don't underestimate anybody – a right platform and a good knowledge can transform life - KBC is that platform."

Anup Vishwanathan, Business Head SET account, Leo Burnett said "Last year's campaign celebrated 'knowledge' and since the thought that 'koi bhi gyaan vyaarth nahin hota" (no Knowledge ever goes waste) and truly 'knowledge is the passport to a better life' is rooted deep in our collective psyche – hence 'Koi Bhi Sawaal Chota Nahin Hota' was relatable to people across and received a lot of appreciation, awards, popularity and ratings. The campaign created a unique grammar for brand KBC – insightful message delivered in a punchy popular entertainment format to be consumed by people from across social spectrum."

Like last year, this year too Mr. Amitabh Bachchan will anchor the philosophy of KBC in all the films.  Delivered in its characteristic style, this year's KBC campaign will have five films each with a distinct story and a distinct character, that will engage, entertain and bring alive the core thought of this season – Koi Bhi Insaan Chota Nahin Hota. The Campaign is conceptualized by Leo Burnett (Creative Agency) and executed by Chrome Pictures (Production House).

"In what will be first for any television campaign, it will have a worldwide premiere on Youtube on 15th June, before being circulated elsewhere. Youtube is SET's partner for KBC and with its unmatched ability to reach out to millions in matter of minute, it is a perfect platform for first look of KBC's much anticipated Campaign" says Danish Khan, Senior Vice President & Marketing Head, SET.

The present campaign consists of a series of five extraordinary films each with a different story, character, set-up and theme but with the same thought – koi insaan chota nahin hota

+ 4
9 years ago Great! Can't wait for this. Amitabh sir rocks and he is the best.