View Profile
Bollywood's Chikni Chameli aka Katrina Kaif has been 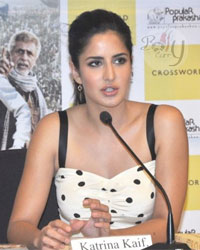 confirmed by Prakash Jha for Raajneeti 2, in which the actress will be seen playing the lead role and supposedly the hero of the movie. Unfortunately Ranbir Kapoor, who starred in the first installment of the political thriller, will be absent in this sequel, as he preferred not to be side-lined by his 'alleged' ex-girlfriend, Kaif.
Jha announced that Raajneeti 2 will take a complete spin on the Mahabharat this time, and accepts that in doing so it has become rather challenging to take the Raajneeti story forward as most of the characters from the previous movie have expired. He stated that two-thirds of the characters will be completely new, and the story will continue with Kaif in a central role against the political backdrop.
BollyCurry wishes Jha and Kaif great success for Raajneeti 2, and continue to expect the modern-day adaptation of the Mahabharat to excel wonderfully on-screen for a second time.

Mirzapur star Divyenndu opens up about his Journey from ...
55 seconds ago