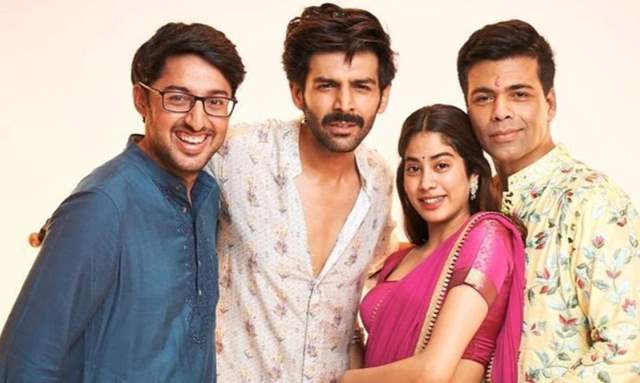 The collaboration of Kartik Aaryan with Karan Johar in a grand announcement for ‘Dostana 2’ sent waves of happiness amongst the fans. While everyone was looking forward to watch the Love Aaj Kal actor play the lead in Karan Johar produced ‘Dostana 2’, a recent report suggests that he is no longer a part of this venture as Dharma Productions is replacing the actor.

A recent PeepingMoon report suggests that not only will Dharma Productions or any other film business of Karan Johar’s ever work with Kartik Aaryan again, but they have replaced the actor from their major on-the-floor production Dostana 2.

Apart from its decision to replace the actor mid-shoot, the production house also adopted a harsh decision to ban the actor from working with any of Karan Johar lead companies. The report further quoted a source who said that Dharma was pushed to the wall by Kartik’s “unprofessional behaviour” and having burned its fingers with him on the Collin D’Cunha-directed Dostana 2, it has vowed never to work with him again.

It is also being speculated that Kartik’s alleged tantrums on Dostana 2 began as soon as he broke up with lead actress Janhvi Kapoor whom he was reportedly dating.

The two even took a holiday in Goa with Janhvi’s younger sister Khushi in January. Nobody knows what went wrong there but Kartik reportedly came back changed, reported the PeepingMoon.

The gossip is that Kartik started being vindictive with Janhvi. Both the actors were committed to Dostana 2, Kartik made it impossible for her to do Shashank Khaitan’s film (then Mr. Lele) and she lost it to Kiara Advani. Speculations are rife, Kartik doesn’t want to share screen space with his ex anymore it seems.

The PeepingMoon report also quoted a disbelieving trade analyst, when informed of Kartik’s ouster from Dostana 2, said, “Despite all the nepotism noise, Karan Johar chose an outsider to frontline one his most awaited sequels. Kartik will regret this. Dharma is a big production house. Look what Dostana in 2008 did to John Abraham’s career.”

A source from Dostana 2 said, “It’s strange for an outsider like Kartik to give such attitude to a nepo kid like Janhvi and a producer like Dharma. This, after shooting for 20 days. It will cost us crores and also put on hold the career of Lakshya who was making his debut. Janhvi is a star and will go on to do other big films.”

The trade pundit added, “At the peak of the nepotism row, Karan Johar cast an outsider with just a handful of films along with a newcomer and a debutant to take ahead the legacy of a super hit like Dostana that had Priyanka Chopra, Abhishek Bachchan and John Abraham. Kartik seems to have forgotten that.”

Now, the aftermath of Kartik Aaryan’s alleged tantrums is that he is being replaced from ‘Dostana 2’. Dharma would rather sacrifice 20 days’ shoot than continue working with the actor.

“Dharma is such a prestigious banner and KJo is reputed for launching careers – but never at the cost of a film’s future and the livelihoods of its cast and crew,” the trade source added, as the recent reports suggest.

This has also led Janhvi to prioritize the big-budget romcom at Kartik’s insistence and was unable to accept another time-consuming project like Mr. Lele.

Meanwhile, it is worth pondering upon, if Kartik's recent setback will also impact his career leading to the decline in his fees.

29 days ago Sounds like someone didn't give in Aunty's demands. Good luck Kartik.