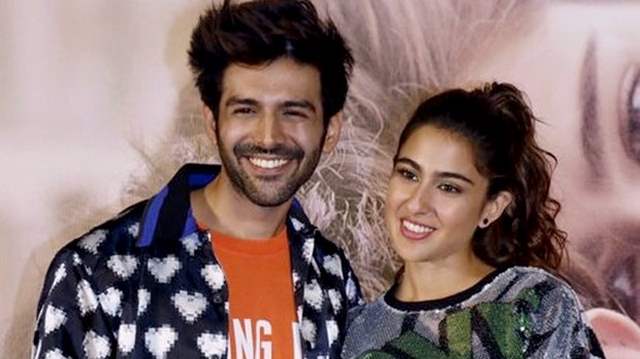 While working for Love Aaj Kal 2, Bollywood actors Kartik Aaryan and Sara Ali Khan were rumoured to be dating, however, they were claimed to have broken up before the film's release in 2020. For the first time in public, the team reassembled for an international magazine's award ceremony two years later.

Kartik appeared to be clutching Sara's hand throughout their brief conversation. Both were spotted clutching their frames after being recognised for their achievements. Sara wore a blue and black glittery gown for the occasion, while Kartik looked stunning in white formals.

A fan club of Sara and Kartik took to Instagram to share the picture. They posted, “After 2 years we seen this real and official picture of sartik It's real beauty no edit no filter Thank you so much @gqindia for this unexpected picture.”

During the filming of Love Aaj Kal 2, Sara admitted to having a crush on Kartik on a discussion show hosted by Karan. The two broke up weeks before the debut of their film. Their breakup is still unclear, and they have both unfollowed each other on Instagram.

Kartik is now promoting Bhool Bhulaiyaa 2, which is set to hit theatres on May 20, 2022. Tabu and Kiara Advani feature in the key roles in the horror-comedy. Aside from Bhool Bhulaiyaa 2, Kartik will appear in Freddy, Shehzada, and Sajid Nadiadwala's upcoming film.

Meanwhile, Sara will be seen in Laxman Utekar’s next and Gaslight. The former stars Vicky Kaushal as the male lead and the latter also stars Vikrant Massey in the lead role.