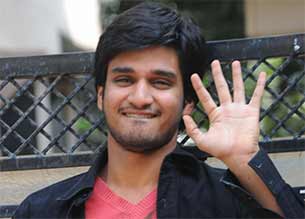 Telugu actor Nikhil Siddhartha is foraying into Tamil film market with upcoming film "Karthikeya". He believes the Tamil-Telugu bilingual will give him an opportunity to expand his base and cater to large audiences in both the industries.

"A lot of Tamil actors are entering Telugu industry with their dubbed films. When I got this film, I felt I should also make use of this opportunity to enter the Tamil industry. Moreover, 'Karthikeya' is a bilingual and not a dubbed film with a lot Tamil of actors. We have also shot in Tamil Nadu to make it look authentic," Nikhil told IANS.

Directed by debutant Chandoo Mondeti, "Karthikeya" is a thriller. The movie is also Nikhil's first attempt at the genre as he's usually known for entertaining audiences with his romantic and comedy roles in films such as "Happy Days" and "Yuvatha".

"Although this is my mainstream attempt at the thriller genre, I don't want audiences to think it's a thriller flick all the way. It also has elements of love, friendship and comedy to entertain. So it's a thriller with a lot of entertaining elements," he said.

Nikhil, who plays a doctor in the film, spent quality time with aspiring doctors to master the nuances required to play his role.

"In my last film, I played a pickpocket. I started behaving and talking like one throughout the shoot. In 'Karthikeya', I play a doctor and in order to play the role, I spent nearly a month talking to MBBS students. I spent a lot of time studying them, their behaviour and how they even dress," he said.

Known for his lean look so far in his career, Nikhil was asked to gain weight for his role in the film. He felt it was necessary as he's playing a mature role that has a lot of powerful lines to mouth.

"I play a matured role and have some strong dialogues to deliver. My director and I felt that I needed to look physically strong to fit the role. I worked on my chest and shoulder a lot but didn't increase my overall weight. I had to eat a lot," he added.

He says the dialogues actually tested his potential as a performer.

"I have strong dialogues in scenes with senior actor Tanikella Bharani. To even stand your ground against him and deliver dialogues is not a joke. I got my dialogues few days in advance and prepared all night in front of the mirror in different expressions," he said.

"I had to do it carefully because if I go a little overboard, people will complain or the dialogues won't hit the mark," Nikhil added.

He worked extremely hard to pull off some important scenes.

Recalling one such scene, Nikhil said: "We were shooting near a temple in Kumbakonam and I had to be in a muddy lake at midnight. I had to take a dip in it and I did it in the heat of the moment. Next morning, when my director and I walked past that lake, we found snakes in that lake. I was shocked but I had to take that risk as an actor," he said.

Tina Philip on moving in with Nikhil Sharma