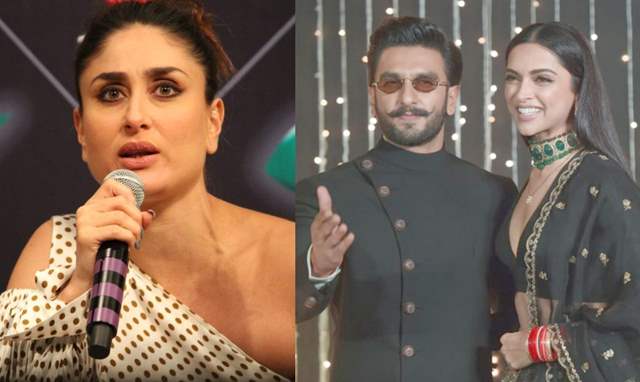 Kareena Kapoor Khan left Sanjay Leela Bhansali's Goliyon Ki Raasleela Ram-Leela days before filming and had said "with me, it's all about mood". But, Bebo walking out surely did get the star couple Ranveer Singh - Deepika Padukone together!

Kareena Kapoor Khan is known for speaking her mind and breaking stereotypes. The actress has, on many instances revealed that she never backs off from following her heart and something similar had happened after she signed Sanjay Leela Bhansali's film Goliyon Ki Raasleela Ram-Leela.

Reportedly, Bebo was the first choice for Ram - Leela and SLB wanted to cast Kareena and Salman Khan together in the film and initially they were the original choice for the film. But, destiny had other plans!

In the nick of time, Kareena walked out of the project leaving everyone shocked and the shoot stalled! Days before the filming of the movie was supposed to begin, she left the film and that moment Bhansali had no other option left and he turned to Deepika Padukone and she too agreed to be her replacement.

Later, in an interview, Kareena accepted about walking out of the film at the last moment and even said that she is the only actor 'who can boast of giving films to other actresses'.

In an interview with Deccan Chronicle in 2013, Kareena spoke about walking out of Ram Leela in favour of Gori Tere Pyaar Mein.

I confess that I’m mad. There have been times when I’ve signed a film and then felt it was wrong. Yes, I was supposed to do Ram-Leela but I changed my mind. I decided to do Gori… instead.

She further went on to reveal that it's all about her mood and that she doesn't do things if her mood isn't in favor of it.

With me, it’s all about the mood. There are no regrets, I’ve worked with some really good directors. I’ve missed the chance to work with Sanjay Leela Bhansali. But there’s always a next time. I'm the only actress who can boast of giving films to other actresses.

Bhansali spoke about the incident in an interview to Hindustan Times and expressed his shock.

The set was made already, and it was shocking - her exit 10 days before shooting.

The filmmaker experienced a similar situation with Salman Khan many years later, when the star walked out of Inshallah, citing creative differences.

In the end, SLB went ahead with his one of the ambitious projects, Goliyon Ki Raasleela Ram-Leela with Deepika Padukone and Ranveer Singh.

On the sets while working on the film, the duo fell in love and went on to do two more movies with Bhansali and rest as we know is history! So eventually, Bebo's mood swings did play a crucial role in getting one of the most loved and celebrated jodi' of B-town together.

Currently, on the personal front, Kareena is expecting her second child with husband Saif Ali Khan and on the work front, she is awaiting the release of her next, Laal Singh Chaddha, the official remake of Forrest Gump, starring Aamir Khan.