View Profile
If grapevine is to be believed, actress Kareena Kapoor is set to tie the knot with her beau 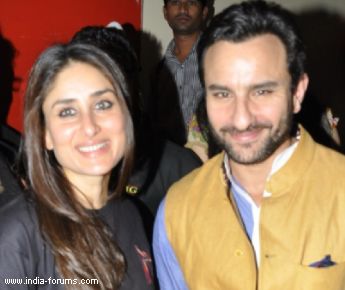 Saif Ali Khan soon, but she is mum about it as of now.

She dodged questions related to her wedding at an event here Wednesday.

Asked if she browses through bridal wear online, Kareena said: "Your question doesn't interest me."

Kareena is the brand ambassador of Sony Vaio Laptops in India and was put to wedding-related queries on the sidelines of the launch of its new campaign - spark a trend.

Meanwhile, Saif's family members, including his mother Sharmila Tagore and sister Soha Ali Khan, have reportedly said that the wedding will be Oct 16 this year.

Asked to confirm the date, Kareena chose not to respond.

Filmmaker Shekhar Kapoor says he is impressed with some independent films showcased on internet.

"Some of the edgiest films I see are not in theatres but on videos on the internet, which is provoking an exciting new form of cinematic expression," Kapur tweeted.

"Filmmakers often become too media dependent and in doing so, merge their identity with the media view of them, losing the originality of their voice," the 66-year-old tweeted.

"One of the most important thing for an artist to do is to take a long break from success," he added.

Actors Neil Nitin Mukesh and Sonal Chauhan are busy shooting "3G" in Fiji, and are thoroughly enjoying the experience.

"This is the first film I'm doing without a single day's break. Both @sonalchauhan7 &I have been shooting non stop and will continue to do so," Neil tweeted.

Sanjay Choudhary Attacked By Goons; To File a Police ...
12 minutes ago