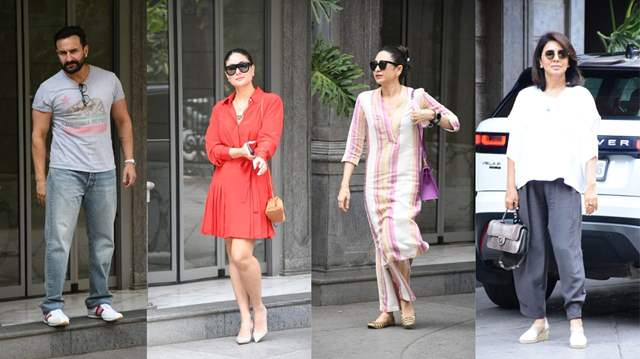 Todays marks the birthday of veteran actress Babita Kapoor. Kareena Kapoor Khan fans were treated to a visual spectacle today as she set her foot out in style to commemorate her mother Babita's birthday at her father Randhir Kapoor's home.

Kareena, who is known to be a style icon, was seen walking to her father's house in a striking red dress. The gorgeous mother of two looked stunning in a short red gown and turned heads as she paused and posed for the paparazzi before entering the building.

She was clad in a short red dress and heels. She accessorised with a chic sling bag and oversized sunglasses. Her hair was tied back in a bun. Apart from her Karisma Kapoor was also spotted in a striped kurta and plazzo pants keeping her look simple yet chic. She accesorised her look with a purple hand bag and stylish sunglasses.

Neetu Kapoor and Saif Ali Khan along with Reema Jain also made their way to Babita Ji's birthday lunch. Neetu Kapoor was seen attired in a white top with black pants. The Kapoor family have been in headlines for the past few days owing to Ranbir Kapoor and Alia Bhatt's wedding which took place on the 14th of April.

Their wedding was an intimate affair which was attended by only the immediate family members and close friends of the actors. Since the wedding has taken place, pictures and videos from their nuptials and pre- and post wedding ceremonies have been conquering the internet. Fans cant stop gushing over the adorable pictures of the couple immersed in love.