View Profile
Recently Kareena Kapoor unveiled the latest issue of Filmfare at an event that featured the undisputed ‘Queen of Bollywood’ on its cover. Kareena was also found sporting a huge diamond solitaire on her left hand, which led to a lot of speculation of her engagement to Saif Ali Khan. 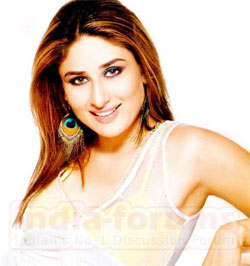 But a friend close to her clarified, "Bebo always had the ring and had been wearing it for some time now. And Kareena is in the best phase of her career and has exciting projects on hand. And she has no intention of getting married for the next five years. Both Saif and Kareena are enjoying and focusing on their respective careers and have no intention of settling soon"

Kareena is considered as the undisputed claimant for the mantle of No. 1 actress in Bollywood with a slew of big forthcoming films like 'Tashan' with Yashraj, ‘Agent Vinod’, ‘Golmaal Returns’, ‘Kambakth Ishq’, a film with John Abraham and another film with Karan Johar among others.

Besides her films, which will consolidate that position, 'Brand Kareena', like 'Brand SRK and Big B’, is also known as the 'Endorsement Queen' in the endorsement bandwagon. Kareena's high profile endorsement brands consists of Globus, ICI Paints, Head&Shoulders, Boroplus cream, Citizen watch etc..

So, Kareena is truly riding the high waves of Bollywood! -(SAMPURN)