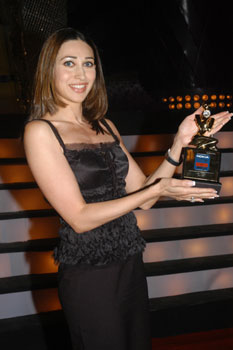 Accepting an award on behalf of Kareena Kapoor, elder sis, Karishma Kapoor, mentioned in her acceptance speech, that Kareena wished to specially thank Shahid Kapoor for his support during the making of their last movie together, Jab We Met.

Touted as the most prestigious awards ceremony of the year, Nokia 14th Annual Star Screen Awards will showcase the moves and grooves of the sultry Katrina Kaif on a mix of popular chartbusters from her recent releases. Also, in an entertaining performance, the ravishing Urmila Matondkar takes the audience back to the golden era of movies with a retro performance on hits from that period.

King Khan, SRK, sets the stage on fire as he flaunts his recently acquired six packs and boogies away to the hot dard-e-disco number and other smash hits of the year. To add to all the glamour and glitterati of the evening are power-packed performances by Shahid Kapoor, Ritesh Deshmukh and the zestful duo Amrita Arora & Dia Mirza at the Nokia 14th Annual Star Screen Awards.

Ezria_Fan_4ever 12 years ago yeah they made a strange couple,
kareena looked too big for shahid,
shahid suits with amrita or ayesha takia

Jasminedsouza 12 years ago Shahid deserves all d thanks...
Jab v met was a hit coz of him....

Fazila~ 12 years ago i always though skr would be my only crush, but after jab we met, hai...i fell in love with shahid too......hehehehehe

jasmine_triv 12 years ago They did make a strange jodi. Shahid looks better with Amrita Rao

prishika 12 years ago shahid is awesomeeee and shoooo very cute!!! lol
....and he deserves someone who will appreciate him and not break his heart and thank him!!!
i just watched vivah yesterday and OMG....i fell in love with shahid's character...
love him!!

Vitna 12 years ago Well dat waz nice of her!!! well im sure shahid will get a betta girl!!!! he desirves a betta gurl!!