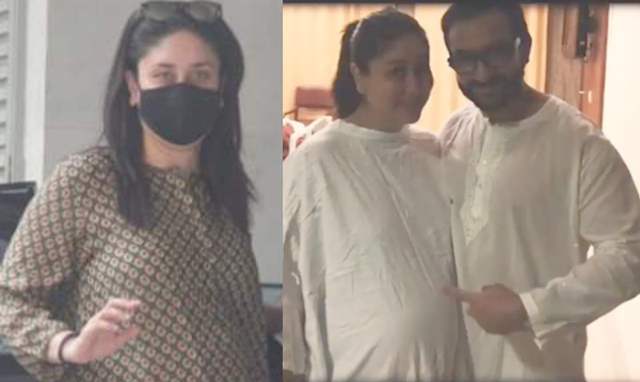 Kareena Kapoor Khan has been reportedly admitted to the hospital. The actress was due around the Valentine's week and as confirmed by her daddy and veteran actor Randhir Kapoor, her exact due date was February 15, 2021 but with the due date now being crossed long back, it seems Bebo's baby number 2 is taking its own sweet time and has been enjoying in mamma's womb.

With fresh reports coming in and according to FPJ sources, Kareena's will deliver her second child at the Breach Candy hospital in South Mumbai and for the same she has already arrived at the hospital and the baby is all set to enter the world anytime soon!

Just like her last pregnancy, Bebo has been actively working throughout her pregnancy even this time and was recently also spotted at her uncle Rajiv Kapoor's funeral. Later, she also visited her father Randhir Kapoor for a small birthday affair.

Despite being heavily pregnant and crossing her due date, she continued shooting and was recently spotted leaving her residence with her team for a final shoot before her delivery and she even took to her social media account and shared that sh'es going strong.

While there are no confirmed reports of her due date, except that she's due this month, close friends and family have been visiting her on regular basis.

A night before yesterday, her sister, Karisma Kapoor, and mother, Babita Kapoor were seen at Kareena's apartment making sure that she was doing well. Even Kareena's step-son, Ibrahim Ali Khan checked up on her.

Randhir Kapoor and Babita — were spotted at the Mount Mary Church in Bandra. Pictures online showed Randhir and Babita at the church, with Randhir being assisted by an aide.