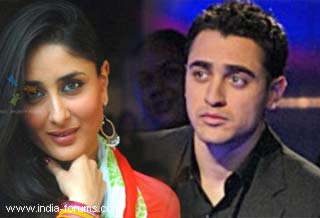 Filmmaker Karan Johar feels the USP of his next production venture, 'Ek Main Aur Ekk Tu', is the unusual pairing of Imran Khan and Kareena Kapoor.

'What's unusual is what's different and what's different is what is working today. So, I think Imran and Kareena being unusual is the USP of the film,' the 39-year-old director-producer said at the 160th year celebration party of cosmetic brand 'Kiehl's'.

Directed by debutant Shakun Batra, the romantic-comedy will be released in February around Valentine's Day.

'We are really excited. It launches a new filmmaker. All of us are really geared up to launch its music and then its (promotional) campaign. It's a great slice-of-life love story and it's a perfect date film for everyone out there,' said Karan Johar.

Karan's Dharma Productions is also ready with 'Agneepath(2012)', a remake of the original film released in 1990 under the same banner.

'Koochie Koochie Hota Hai', an animated remake of the 1998 Hindi film 'Kuch Kuch Hota Hai', is expected to hit theatres by the end of next year.

Meanwhile, he is busy directing and co-producing 'Student Of The Year' with Shah Rukh Khan. His last film as a director was 'My Name Is Khan'.