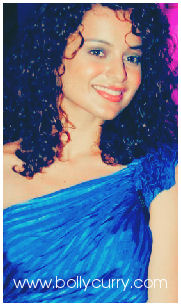 With her ever overflowing kitty of work projects, Kanaga Ranaut, it appears, has finally been trapped by a date clash, although unintentionally, forcing her to chose one film over the other. Kangana, who was recently shooting for Ratan Jain's Tez in London, after wrapping up that schedule has moved on to now work for Bhushan Kumar's I Love NY.Problems arose for busybee Ranaut when Jain called her back to the sets in London to shoot urgently for a day. And although he even spoke to Kumar personally to cut an exception for Kangana owing genuine circumstances, Kumar had to deny the request. To his credit,  Kumar did try to manage Kangana's dates so she could be briefly relieved, but nothing would work out because with traveling and the day of shoot totaled, a minimum of three days lapse would occur on his sets, which could not be accommodated. Both parties even entertained the thought of extending their shoot schedules to make time, but since both Kangana and Sunny Deol leave for IIFA on June 20th, that option too stands dismissed.

Consequently, it turns out that with no alternate for the Tez team, they just have to make do without their leading actress.