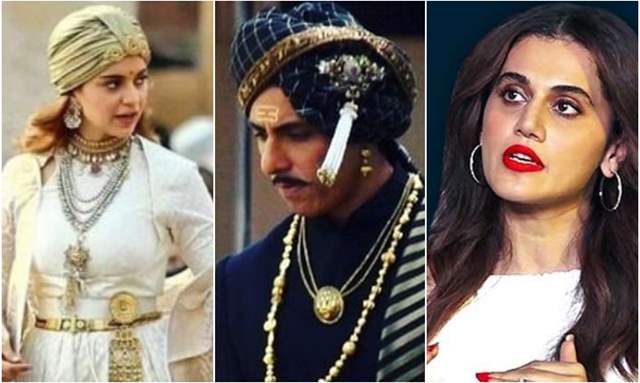 A war has ignited on Twitter between the two fierce ladies of Bollywood, Kangana Ranaut and Taapsee Pannu. While their social media brawl is not new, it has reached bigger heights this time. It all started with Kangana calling Swara Bhasker and Taapsee ‘B Grade Actresses’ in a recent interview.

Followed by which, Taapsee gave a befitting reply to Kangana’s comment and stated that “ I refuse to take advantage of someone’s death for personal vendetta and I refuse to make mockery out of the industry that gave me bread and identity.”

However, the war of words has not come to an end now. While Kangana’s social media team has relentlessly been tweeting about Taapsee and Swara, Taapsee Pannu has now shared an old video that claims that Kangana removed Sonu Sood from the film Manikarnika.

Taapsee retweeted a post by a Twitter user wherein Sonu Sood can be seen talking in an interview how he was removed from the film Manikarnika after shooting for 45 days. The old video has gone viral on the Internet and Kangana is being called out for her hypocrisy after she targeted the other actors for not standing up in the industry. 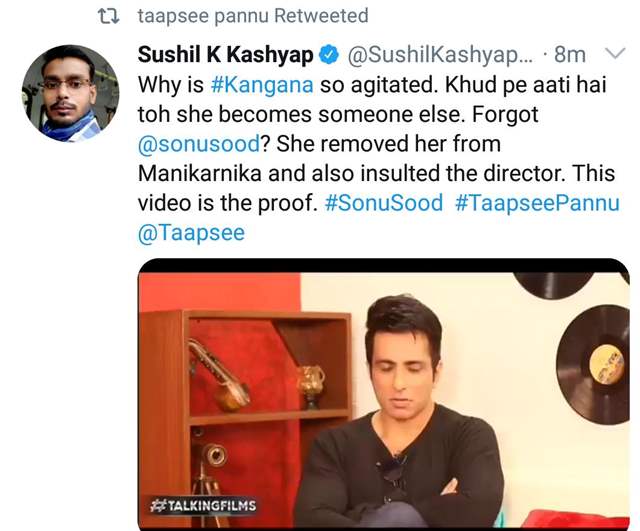 For the uninitiated, Kangana stirred up a storm in her recent interview to Republic TV as she said:

“For me, I have only to lose here (in Bollywood) because I know tomorrow they (movie mafia gangs) will get some 20 needy outsiders like Taapsee Pannu and Swara Bhasker, who will get up and say, ‘Oh, only Kangana has problem with nepotism, but we love Karan Johar’. If you love Karan Johar, why you both are B-grade actresses? You are better looking than Alia Bhatt and Ananya Panday. You both are better actresses. Why don’t you get work? Your whole existence is a proof of nepotism.’

To which, Taapsee gave a befitting reply and told Hindustan Times:

“Yes, I’ve been dropped out of films and replaced with star kids but the fact that Kangana and her sister (Rangoli Chandel) try to discredit me and my hard work, call me names, put wrong allegations on me, is actually an equal level of harassment, if not more. All this because I refuse to sing her tune and because I refuse to see her as the flag bearer of outsiders because we all are not bitter people?”

Taapsee’s reply is being lauded by industry celebrities and Sonakshi Sinha hailed her response as she wrote on social media: “Proud of you @taapsee! The dignity, maturity and integrity with which you have responded has my respect and I am sure of most others too. More power to you.”

Aamir Khan Can't Contain his Happiness after Turning a ...
37 seconds ago

Shekhar Kapur Appointed as President of FTII Society & ...
6 minutes ago