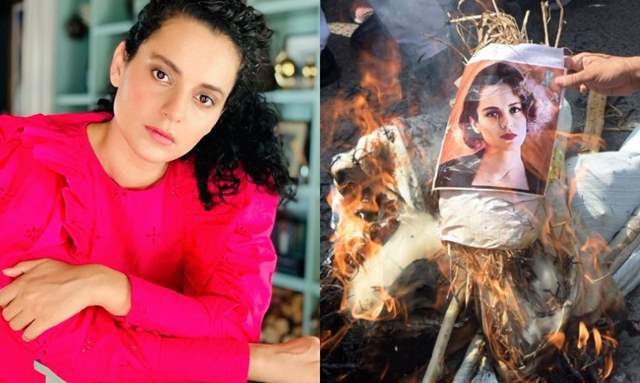 Actress Kangana Ranaut’s recent remarks against the farmers' protest have sparked several controversies and debates on social media. While her views are being opposed by netizens and celebrities like Diljit Dosanjh, she has now faced the wrath of a group of widows of farmers in Maharashtra.

According to a report in IANS, scores of widows of farmers came together as they retaliated strongly against Kangana’s remarks and burnt her effigies in Maharashtra's Yavatmal district. Reportedly, the women were protesting against the farm laws, which later turned violent as they burned an effigy of Kangana and hit it with shoes to express their anger for her 'insulting statements'.

The women protestors also carried banners and boards which read:  'Yes, we are farmers but not terrorists', referring to Kangana's recent tweets against the farmers protesting at the Delhi border.

In addition, the protests have also called for a boycott on all Kangana Ranaut films until she does not withdraw her remarks and also demanded an unconditional apology to the farmers.

Meanwhile, Kangana has been engaging in social media wars with other Bollywood actors like Diljit Dosanjh, Taapsee Pannu, Swara Bhasker among others.

2 months ago India is slowly becoming the new Nazi Germany.

2 months ago BJP is now painting punjabis as the new anti-nationals.add them to the list of other anti-nationals muslims, students, dalit, Bengalis, Malyales. Sad. National=Pro-BJP. Everyone else anti-national . BJP wants Industralilists to rule the nation, instead of the people.

+ 3
2 months ago Whoever may be right or wrong in this, but randomly calling farmers terrorists showed Kangana’s class or lack of it. She has simply lost her marbles and is losing all credibility with that motor mouth of hers.