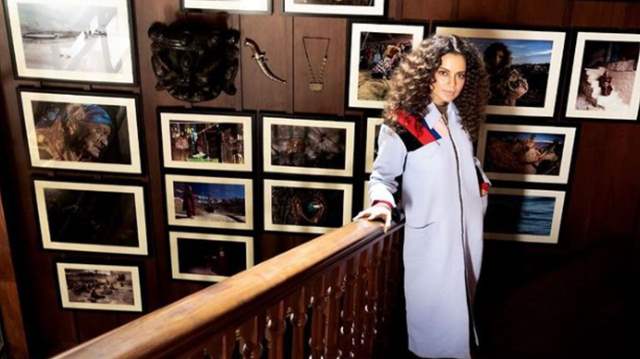 Kangana Ranaut is one of the actresses, who never misses an opportunity to engage with her fans, and usually does it through social media. She is an avid social media user and is often seen posting pictures, or her views and opinions on various subjects while engaging with her followers.

Recently, the Queen actress took to her Instagram account and gave fans a glimpse of her new abode in Manali. She shared a bunch of pictures while explaining the details of the design and idea for of her architecture.

Sharing a set of pictures on Instagram, Kangana wrote, “Here is something for all design enthusiasts, who love the decor and are curious about mountains architecture which is local but ancient and deeply traditional. I built a new home it’s an extension of my existing house in Manali but this time kept it authentic, typically mountain style made of river stones, local slates, and wood. I have also incorporated Himachali paintings, weaves, rugs, embroideries, and wooden karigiri. Have a look, also these pictures are clicked by an incredibly talented Himachali photographer @photovila1."

She shared another set of pictures with her standing in the hallway and highlighting the wall behind her. With the pictures she penned, "This wall is an ode to Himachal, it’s various traditions, art and people…. All these pictures are clicked by Harnaam @photovila1 he also helped me decorate this wall."

Kangana Ranaut was last seen in the film Dhaakad. Arjun Rampal and Divya Dutta both star in the film. The actress has a bunch of projects in the pipeline. She will be a part of the political drama, Emergency. She also has Tejas where she will be playing an Air Force pilot, along with Manikarnika Returns: The legend of Didda and Sita: The Incarnation. She also wrapped her production venture Tiku weds Sheru.