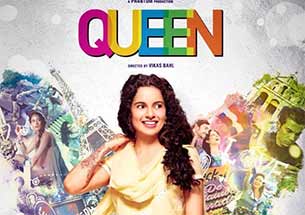 Kangana Ranaut seems to have swept the entire Hindi film fraternity off its feet with her performance in "Queen". Actor-director Arbaaz Khan is the latest celebrity to be floored by the actress' performance in the movie.

He has called her an extremely gifted actor.

"I am going to personally talk to her (Kangana) and congratulate her. She is fabulous in the film, she is so natural, she is so gifted and talented. In this film you can see her come into her own, she is so endearing, watchable and this film is beautiful," the 46-year-old said here Monday following a special screening of "Queen".

Arbaaz further praised the film, saying that it is one of the best he has seen in recent times.

"It is an outstanding and a terrific film. Kangana has done such brilliant work and it is a very well-written and beautiful film. One of the best films that I have seen in recent times and I think it will do really well," Arbaaz said.

Directed by Vikas Bahl, "Queen" is receiving a wonderful response at the box office. It is the story of a woman who goes on her honeymoon alone and enjoys her journey of self-realisation.

Kangana Ranaut is in Awe of Yogi Adityanath; Applauds his ...
5 minutes ago

Farhan Akhtar is excited to kick-off the opening match of ...
12 minutes ago

Arjun Bijlani on music video with Reem Shaikh: I feel Ishq ...
32 minutes ago