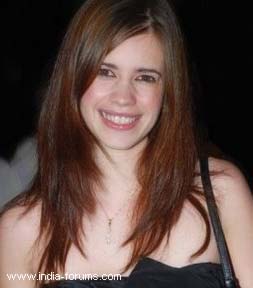 Indian actress of French descent Kalki Koechlin loves to gorge on street food every time she is in the capital.

'I love Delhi for its food, I love the street food, the momos, the kebabs... I love the north Indian food,' the 28-year-old actress said here at the Good Food awards function.

Kalki's slim frame is certainly deceptive as she is quite a foodie like her husband, filmmaker Anurag Kashyap. The actress who grabbed eyeballs and also the Filmfare award for best supporting actress for her very first film 'Dev D', is very fond of Delhi roads as well.

'I love the roads... people are very spoilt with the roads in Delhi, we have horrible roads here in Mumbai... So every time we go to Delhi, we're like 'Wah! Rajdhani hai!',' the actress said.

Kalki worked in Delhi for her film 'Dev D', and has fond memories of shooting in Paharganj even though it is a crowded area. She says she was lucky she wasn't as famous then, otherwise shooting would have been quite tough!

Her last film 'My Friend Pinto' bombed at the box office, but she received appreciation for her short role in 'Zindagi Na Milegi Dobara'.

Kalki is currently shooting for Dibakar Banerjee's 'Shanghai', which is slated for a Jan 26 release. The actress has teamed up with Abhay Deol and Emraan Hashmi in it.