One of the longest running K-shows, Kahaani Ghar Ghar Ki will finally go off air on October 16th, and according to our sources, the story will end on a very happy note for the Agarwal family. 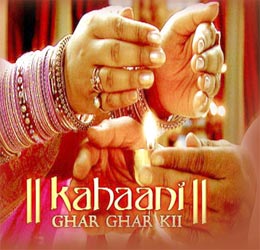 Featured Video
With Parvathi’s biggest enemies Sasha and Pallavi turning positive, the younger generation of the family gets successful in saving Parvathi. Later, Pallavi weds Kamal and gets into the family wherein Pallavi and Parvathi scheme against Trishna and throw her out; thus the whole Agarawal family will live happily ever after! Also, Sasha will end up marrying Gul.

With Kahaani bidding adieu, the buzz was that Rajan Shahi’s new show will be replacing it. But according to our sources, the 10PM slot is totally an Ekta Kapoor territory on Star Plus, and the channel will be airing a special feature for Diwali for 2-3 weeks which will be followed by Balaji Telefilms coming up with yet another big project.

Giving us more info on Ekta’s new show is our well-placed source, “After Mahaabhaarat, the next big show coming from Balaji Telefilms will be a concept similar to the Bollywood film Saudaagar, which will have a fresh love story between families who were thick friends once upon a time, but have turned into bitter enemies!!

+ 2
13 years ago FINALLLLYYYYYYY!!!wow am sooo happy...it should've ended 2 years ago!!!...now when is the good news about Kyunki ending coming up??lol!!

13 years ago omg!.. thts great news.. lol.. excellent!.. finally it's to an end.. crnt wait to see my auntie's face.. she'll b reli upset cuz she luvs watching this.. but i hate it.. so far i ent seen a single episode of it.. but the promos give it all awai lol..

13 years ago aww finally i was beginnin to like kggk but its good that its ending warna evrytime i use to see the promo i use to say ye drama kab khatam hoga hehe... ahan..looking fwd to ekta's new drama..nowadays..her Kis desh main hai mera dil is toTally on toP..!!:)