View Profile
Even after a decade of heartwarming, family- friendly bonanzas, Karan Johar's Kabhi Khushi Kabhie Gham, or 'K3G' as the world knows it, remains to be his biggest 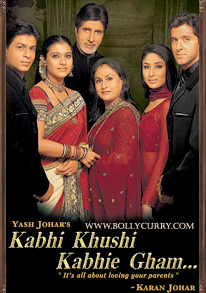 theatrical dream ever. Even though his movies always outdo everyone's expectations and manage to bring a smile on everyone's faces, Karan still believes K3G is the best film he could've ever made!

K3G recently celebrated its tenth anniversary on 14th December and it was nothing but a nostalgic experience for KJo who stated K3G is the "Pillar of Dharma" and it was his father's favorite film too. He also said that if it hadn't been for satellite-media, who kept the film alive in everyone's heart, K3G would not have been what it is. He recently revealed that whenever any of the channels telecasted the film, he would receive hundreds of tweets saying how much the film is loved.

On its 10th anniversary, the film not only continues to remain a forever-favorite with the mantra "It's all about loving your parents"  but it also stands as the only film to have brought such a major star cast in a film so pure at heart. For the record, the film included heavyweights like Amitabh Bachchan, Jaya Bachchan, Kajol Devgn, Hrithik Roshan, Kareena Kapoor, Shah Rukh Khan, Rani Mukherjee, Johny Lever, Alok Nath and Farida Jalal - all in one screen.

While the film enjoys as many as 9 accolades, Johar denies any plans for a sequel yet citing that he feels nervous to write a screenplay to match the enigma of the actors and might fail to create such magic once again. Hence, he puts an indefinite no-entry board to all the possible ways of a sequel.

With K3G completing a decade, it still remains evergreen in our hearts!