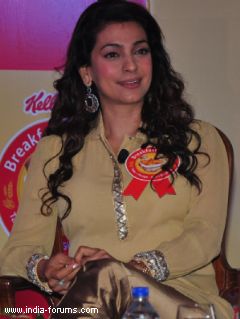 At 46, Juhi Chawla gets approached to play a mother to "grown-up kids" but that's not something she is ready to do right now.

"I get approached for the role of a mother to grown up kids. I say 'No, not now' because eventually I will do that. But I want to go with the flow. Now if you give me an 18-year-old child, it's not fine," Juhi told IANS.

Off screen, she is a mother to two children - a daughter named Jhanvi and a son named Arjun.

The actress is currently busy promoting her film "Gulaab Gang" in which she will be seen in a negative role.

"I thought may be people will laugh at me or something. I was scared about that and skeptical too. But it was the director of the film, Soumik Sen, who could convince me for this role," said Juhi, who will be seen with Madhuri Dixit in the movie.