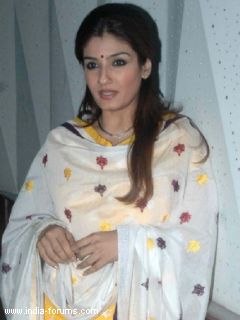 New Delhi, Nov 27 Actress Raveena Tandon, who is making a full-fledged comeback with 'Gin Liya Aasman', finds it very difficult to maintain her personal and professional life so she considers her own limitations while selecting a role.

'Love to work again, keeps me alert and positive and functioning again, but don't know if I'm ready to give into long hrs. Difficult to balance sometimes, love my work, but I realise I have my limitations. Wanna be home more...luckily it's my choice, and I can choose,' the 37-year-old posted on micro-blogging site Twitter.

Raveena got married to film distributor Anil Thadani in 2004 and they have two children - six-year-old daughter Rasha, and three-year-old son Ranbir.

The actress is currently in Pune for the shoot of 'Gin Liya Aasman'.

'Moping about because I'm going to be in Pune 20 days, love Pune, but realising I can't stay without my kids for more then 3 days. Luckily, they'll be joining me on weekends, still, missing them already and I've just come yesterday. Decided not to do films with long outdoors,' she added.

Directed by Rishi Deshpande and produced by Mudassar Aziz and Anil Bohra, 'Gin Liya Aasman' is the story of a six-year-old boy whose father, a naval officer, has been missing since a plane crash.

Raveena, who is playing the boy's mother, is touched by the story line and said: 'Very sweet story, this 'Gin Liya Aasman', deeply moved when I read it,very touching and fast narrative about a little boy and his mum.'

The actress was last seen in 'Bbuddah...Hoga Tera Baap'.