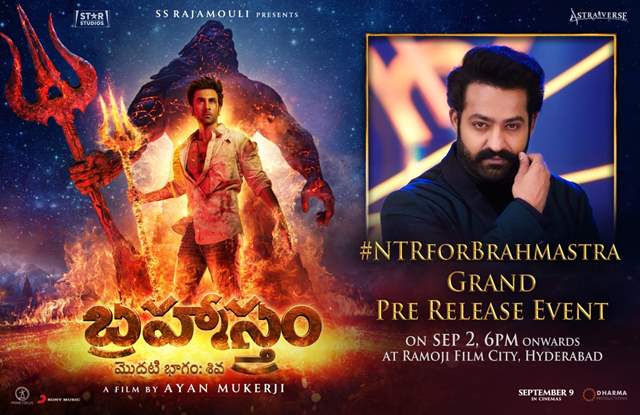 Since only a few days are left for the big release of Ayan Mukerji's film Brahmastra, the promotions are going on in full swing and the cast members haven't left any stone unturned.

Today, the makers and cast members of the film made a huge announcement regarding their promotional events. On September 2, RRR actor Jr. NTR will attend the pre-release event of Brahmastra, starring Ranbir Kapoor and Alia Bhatt. SS Rajamouli will also be there. It will be the movie's sole major pre-release event, and it will take place at Ramoji Film City in Hyderabad. The squad will go with Nagarjuna Akkineni, who is also a part of the film.

Ayan Mukerji also took to his social media handle and shared the announcement video. The video has an amalgamation of clips from Brahmastra and RRR featuring Jr. NTR.

Sharing the clip, Ayan penned, "NTR for BRAHMĀSTRA 💥 Through the journey of this movie, there have been some very big personalities and achievers who have left me short of words with their generosity towards us. Another such Star in Brahmāstra’s Sky is now NTR… who is going to shine bright as he always does, at our movie’s biggest event in Hyderabad! Coming together with Ranbir, Alia, Nag Sir, our Team, and of course Rajamouli Garu, for whom my love, respect and gratitude has no boundaries. So excited about Tarak giving Brahmāstra some love and energy, and helping us take our movie into the Telugu Universe ❤️💥"

Brahmastra is intended to serve as the first one in the planned trilogy as a part of its own cinematic universe called 'Astraverse'.

The film features, Ranbir Kapoor, Alia Bhatt, Amitabh Bachchan, Nagarjuna and Mouni Roy. The film is slated to hit the big screens on 9th September in 5 languages- Hindi, Tamil, Telugu, Malayalam, and Kannada. S.S Rajamouli will be presenting it in all the 4 south languages.