The release date of John Abraham starrer 'Aashayein' has been pushed forward as the actor is busy with his brother's wedding in Romania.

Elahi Hiptoola, director Nagesh Kukunoor's associate and co-producer, confirms these developments saying: 'Yes, we did feel that we needed a couple of weeks extra, what with John's brother's marriage. So, yes, we're moving to July, probably the first week.'

So, instead of June 20, the film will be released most probably July 4, which is also the date for Harry Baweja's son and Aamir Khan's nephew's debut films. 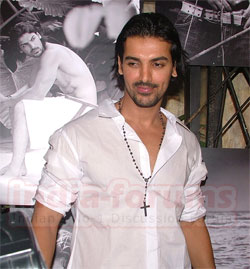 'It is a film that needs careful nurturing. We don't mind waiting a bit. But we don't want the release to go wrong,' Hiptoola told IANS.

Most members of the director 'Aashayein' team feel that the film would be John's turning point as an actor. So, no stone is being left unturned to make sure he appears in the best light possible in this make-or-break movie.

' 'Aashayein' is crucial for both John and his director. Both were banking heavily on their last projects - John on 'No Smoking', which turned out to be a no show and Kukunoor on 'Bombay To Bangkok' that was a fiasco. Both the actor and the director feel 'Aashayein' would be a new beginning for them.

But for John, family always comes first. And now that his brother's wedding is just days away, he finds a lot of attention he would have ideally given to 'Aashayein' is now being taken up by the wedding in the family.

'Since Allan's wife is Romanian the wedding is in Romania. The arrangements therefore become doubly difficult. John's parents are too old and frail to manage the nitty-gritty. Even Bipasha Basu is shooting in Bangkok. That leaves John to supervise all the wedding plans. And Allan is his only brother. John wants to make it a memorable wedding,' said another source.

Interestingly, John has no love interest in 'Aashayein'. There is a new girl Sonal Saigal to begin with, but the female lead is played by one of the 'Chak De! India' girls, Anaitha Nair. John and she share an unusual equation, quite like Abhishek Bachchan and Aishwarya Rai in their ready to release 'Sarkar Raj'.