Pain, suffering and bereavement bring out the best in an actor. And John Abraham knows it only too well, having shot 'Aashayein' while both his parents were ill and in hospital.

Recalling the harrowing period John told IANS: 'Illnesses in the family do scare you a lot. I really believe I'm a family person. My parents are the most important people to me. Their health is very important to me.'

But sorrow was used for creative satisfaction. 'Aashayein' will release on June 20.

'Looking with or without regret is honestly not my space. I'd much rather look ahead. I believe there's a third axis beyond contentment and regret, and that's my axis. I can't have a two-dimensional attitude to my work. I'll always look and find the third dimension.'

Although his films didn't do wonders, brand John Abraham continues to do well in spite of the man choosing to lie really low in recent months. 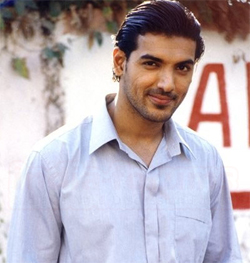 'I believe after a point, one's name - or the brand - acquires a life of its own regardless of failure or success. That's what has happened to me. People have started believing in the kind of person I am and the clothes I wear. I believe I contribute a lot to my brand, as much as it contributes to me.'

John says his clothesline has grown by word of mouth.

'My clothes line-up is going great. We've created an artificial scarcity for my clothes. It is a very niche brand with only seven stores across the country. It's like the 'True Religion' brand that you'd have a hard time finding even at Harrods. I do not want to go to the masses with my clothes line-up. It's a choice I've made.'

In spite of the failure of Anurag Basu's 'No Smoking', John plans to continue to seek unusual roles.

'Conforming isn't my cup of tea. How boring is life if you conform! And how dull life would be if all I did was to chase success. Sure, I want it. But I also want to take the untrodden path. It's the deviations that make my life exciting.

'Some of what I did last year might not have worked. But the fact that there was a debate about them was enough for me. At least the kind of films I do make people curious.'

However, the 'No Smoking' experience has cautioned John about inept marketing.

'I can't allow every opinion and every review devastate me. I need to have confidence in what I do. The fact that I've gotten where I am is proof that I'm on the right track. I believe I need to do more about my kind of cinema. And 'Aashayein' is my kind of cinema.'

He has just completed a long schedule of Karan Johar's 'Dostana' in Miami.

'Priyanka Chopra is my co-star in Karan's film. She's a good girl. Always a pleasure to work with! As for Abhishek, I really enjoy working with him and his father. And director Tarun Mansukhani is a new boy with plenty to say.'