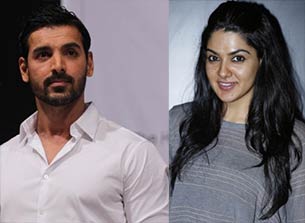 It seems the friendship between John Abraham and producer Firoz Nadiadwala is going from strength to strength as the latter has roped in John for "Hera Pheri 3".

After "Welcome Back", this is the second film in which John has replaced Akshay Kumar.

Though the girl from Dehradun, Uttarakhand, is being kept strictly under wraps by the producer as he wishes to unveil his debutante elaborately, one got to know of the newcomer after Firoz was overheard raving about Sakshi whom he had seen in a South Indian film.

Said a source: "When Firoz met the young hopeful actress, he was very impressed by her confidence, poise and beauty. Firoz immediately signed Sakshi for a three-film deal. The first of these would be the long-delayed third film in the 'Hera Pheri' franchise, which got stalled after Firoz's fall-out with Akshay.

"John has now taken over the franchise. The leading lady just fell into place when Sakhi walked into Firoz's office."