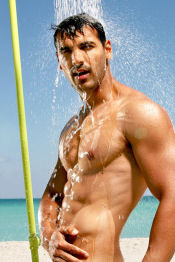 John Abraham, already flashed a small part of it in Dostana. And now he might get a chance to do it again!


If the latest reports are to be believed, the directorTasru Mansukani of the much awaited sequel, Dostana 2, is planning to get more of John's skin revealed in the sequel. John modestly admits that his physique stands out among the Bollywood' s heroes, and is quite ready for such a role.


But otherwise, he is happier discussing girlfriend Bipasha Basu's physical attributes. He thinks that she has the best curves in tinsel town. Regarding Dostana 2, John isn't commenting, except a promise that there will be more of him and guarantees the audiences will be quite shocked.


John we say, is sure as hell becoming Johnny, Bravo!!

Kangana Ranaut tried to mock Deepika, Sara and Shraddha for ...
21 minutes ago

Rhea Chakraborty did not name any Bollywood actors during ...
55 minutes ago

It seems Nothing Can Stop Ekta Kapoor; Not even Lockdown: ...
7 hours ago
View More
TOP