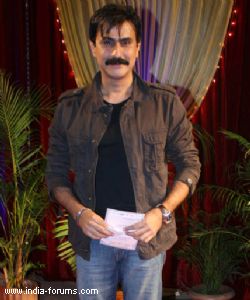 According to our source, "Inder of Sasural Genda Phool will be seen in a different avatar on Sony TV's Parvarrish - Kuchh Khattee Kuchh Meethi. He will play the character of Monty, a childhood friend of Lucky Singh Ahluwalia (Vivek Mushran) . He plays a rich flamboyant man who comes  down to stay at Lucky's place. Rocky is impressed with Monty which is not appreciated by Sweety Ahluwalia (Shweta Tiwari)."

We contacted Jiten who confirmed the news, " Yes, I am doing a cameo  in Parvarrish. Monty is rich and flamboyant in his character. Lucky's son, Rocky is impressed by him, but Sweety does not like that. It's a nice and interesting character that I am playing."

MadameX 8 years ago One of my favorite actors in SGP cast. Go Jiten...you will definitely rock. :D lol

100prabh 8 years ago This looks interesting!!!
Good luck to Jiten for this role!!!
Hope u rock in Parvarish!!
Finally we get to see Sweety Ji's family!!!
Hope to see Sweety Ji bak in her roop!!!
Love u Shweta Tiwari ur the best nd u rock!!!
PARVARISH is AWESUM!!!!!

lacho_dvd 8 years ago parvarish and sgp the most realistic and positive shows i have ever seen...go jiten!!

infinity00 8 years ago Jiten is one of the finest actors I have seen on Indian TV ... He does not get his due respect and lime light but he is truly better actor then all the awarded BEST ACTORS hanging around .

*Dev.* 8 years ago parvarish is a worth watching serial which have a soul reason to watch...its not like saas bahu sagas...always we get a message...gudluck inder bhaiya

Ranveer is Fulfilling his Husband Duties towards Deepika? ...
14 minutes ago