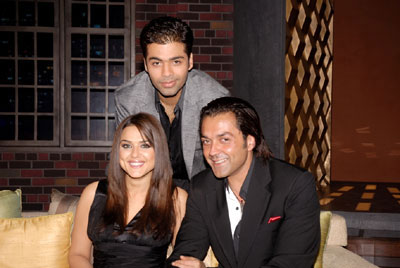 She lights up the screen with her energy and irrestible charm! She is Hot, she is Charming! Having worked with the big names of the industry and playing it all, from vamp to the mother and the lovable girl next door , this high-spirited actress is back again on Koffee... Jaya Bachchan calls her Basanti… Bobby Deol calls her Pritam Singh… Now do you all want to know what her love interest, Ness Wadia calls her…. Yes, the first guest on Koffee with Karan this evening is the childishly petulant, rocking super star Preity Zinta.. Karan’s next Guest comes from a terrific lineage. He's been in the limelight for long, with a superstar father and brother, it took him long to make a place for himself in the industry. But now that this dashing man has carved a niche of his own, it did not take him long to visit Karan for his cup of famous Koffee.... He truly is the brother and the son of the soil and is one of the most loved and the most affable members of the film fraternity. Welcome the stylish Shaka Laka Boom Boom actor, Bobby Deol to have his Hot Koffee with Karan. Watch them Jhoom Barabar Jhoom only on Koffee with Karan, this Sunday, June 10th at on Star One and Star World.

Tune in to watch Preity and Bobby Jhoom as they talk about their forthcoming projects and also about their ready to release film Jhoom Barabar Jhoom. Memories are rekindled as Preity speaks about the early days of her career, while working with Bobby in her fisrt film, Soldier. Preity talks about her love life and the Man of her Life, Ness Wadia. Watch Preity confess that she is now a changed girl, much more mature and mellowed down when compared to last year. Well, get ready to hear Preity talk about her peers Rani and Kareena! Watch Preity commenting on being called ‘Controversy’s Favourite Child’. Bobby adds more flavour to the Koffee as he shares with Karan, why he addresses Preity fondly as “Pritam Singh”. The Koffee gets hotter as Bobby and Preity talk about the warm bond they share with each other and their unique style of talking to each other – they constantly fight and argue!!

As we move towards the end of the rocking Episode, we get to see the duo shoot back at Karan with their wittiest answers in the Rapid Fire Round. What would Preity do if asked her to give up acting? If she was a PR consultant, what advice would she give to Himesh Reshammiya? Which Bollywood actor’s tell-all book would she love to read and which Bollywood actress’s body does she envy? If Bobby would be locked up with Rakhi Sawant and Mallika Sherawat, what would he do? Which ka puttar does he get along best with? Does he prefer critical acclaim or commercial success? Watch out, who takes the hamper home in this very exciting rapid fire round. Will it be Bobby or Preity?

Preity-Life’s been good! I just wrapped up a movie “Jhoom Barabar Jhoom” and now its ready for release!

Preity-Well I’ve had a great time shooting for it… it’s been a great experience… first time working with Abhishek… you never cast me with him!

Karan: Well you guys were the deprived parties in KANK and those two were just having an affair behind your backs. You silly people!

Karan: When you look back at Soldier do you think it was just the other day or you feel, lots of time has flown?

Preity: Actually I didn’t feel these 9 years, to be honest. It’s been the best time of my life. The industry has given me everything and you know people always say, this industry is sleazy, there is a casting couch, people are like this. I think people treat you the way you want to be treated by them. I have never encountered any problem with anybody who’s being cheap or sleazy because I have never portrayed myself like that.

Karan: Because you have met very classy and elegant people.

Karan: Yeah so there has been no problem on that end. I’m more of the couch myself rather than being the casting couch. Yeh Pritam Singh ka origin bata dena mujhe.

Preity: Bobby, please don’t destroy me. Please I beg you!

Karan: You two have been friends for a while and you’ve kept in touch even when you’ll didn’t work together?

Preity: Yes! Bobby and me have known each other before I became an actor.

Bobby: She would be with us. We would all go out in my dads van every night out and she would be sitting right at the back quiet to her self. And one day she came up to me and said Ok! I’m doing criminal psychology. Can I make you my subject? And I said to her, look Preity… I would love to but I’m from this family and if I talk about myself and if you say this is my subject Bobby Deol, I can’t do it!

Karan: You wanted to make Bobby your subject?

Preity: But you know in the beginning, I didn’t know Bobby as Dharmendra’s son.

Karan: Who did you think he was?

Preity: I swear. When I first met him, he was one of the guys in the group and I had to look for someone between 23-28 ka age group, I was finding and I needed 5 subjects and actually I didn’t realize!

So, don’t forget to tune in as Karan chats with Preity Zinta and Bobby Deol on Koffee with Karan this Sunday, June 10th at 9 p.m. on Star One and Star World.!!

15 years ago Sound good.
Hope Karan do it again with Bobby, Sunny & their father together. I always want to know how their life at home, off screen, etc. It will be good if Karan put them in and talk about it.

15 years ago really really looking forward to the episode

+ 6
15 years ago Can't wait for the episode. Priety and Bobby is an interesting pair..:)