The song from Singh Is Kinng, Jee Karda shot amidst the Egyptian pyramids is gradually becoming a chart topper. It has Akshay chasing Katrina mouthing chaste Punjabi lyrics. Its craze however is 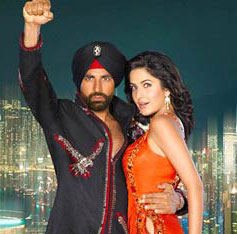 Featured Video
being experienced more in Ludhiana in Punjab. In fact, Akshay's neon green pagdi has become a supercraze in the Punjab city and sell of this particular colour pagdi has shot up very high. Everyone is making a beeline for this pagdi. The local shopkeepers there are in for a pleasant surprise what with their pagdi sales reaching an all time high.

One wonders such is a craze for this one song from Jee Karda now then what will happen once the film is released? There is a dialogue promo thats running of Akshay saying he likes to keep old things, hinting at his 3 day unchanged underwear. So will that be lapped up too? Jokes apart, the film is hot in the trade and the 3 weeks ahead opened advance booking in few cities to bumper response is giving a hint of what lies further!

The only time one remembers a head gear becoming such a big craze was way back in 1991 and it was Aamir Khan's "Captain" cap from Dil Hai Ke Maanta Nahi that was selling like hot cakes what with everyone from masses to classes going crazy over it!