View Profile
Earlier this week, Bollywood's yesteryear diva Rekha was sworn in as a member of Rajya Sabha. Jaya Bachchan, who was also present at the oath-taking ceremony, has expressed her anger at a media outlet that covered the event, but not for the reasons that some may have anticipated. 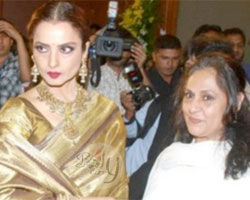 Apparently, their camera was focusing on her reactions rather than the person for whom the ceremony occurred. We hear that Mrs. Bachchan has made her complaint to Rajya Sabha TV for focusing the camera on her continuously during Rekha's oath taking ceremony.
The channel's spokesperson said that they have no control over the proceedings of the house, as they are provided by Doordarshan.
Rekha's alleged affair with Amitabh Bachchan during the late 1970s and early 1980s is no secret to most fans of Hindi cinema.  Since then, the Bachchan family has perceptibly refrained themselves  from the actress.

We've got to agree with Mrs. Bachchan this time; one would expect a certain level of intellectual nonchalance towards such trivia from a network that is supposed to be above mere entertainment.