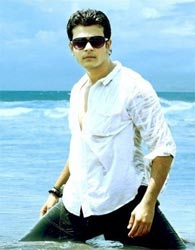 Star Plus' show in the pipeline, temporarily titled Sasural Genda Phool,produced by Ravi Ojha has found its male lead in Jay Soni.

Says our source, "Many had auditioned but Jay Soni fit the bill perfectly. He was the only one who could do justice to the character. So he has been chosen as the male lead paired opposite Ragini Khanna."

Adds the source, "Other veteran actors in the show are Supriya Pilgaonkar, Mahesh Thakur and Shruti Ulfat. Pooja Kanwal (Pavni of Sony's Palampur Express) too returns to the telly scene after her break which she took for her wedding."

We called Jay Soni, but he refused to make any comments.

Ravi Ojha is the man behind Bengali soap Ogo Bondhu Sundori,which is the highest TRP earning show, till date on Star Jalsa. Apparently, Sasural Genda Phool is the Hindi adaptation of it and the expectations are high from this show.

Ragini Khanna says, "I'm happy to be playing the lead role in the show."

Pooja Kanwal Mahtani says, "When Sony had its major revamp, I and Ragini were amongst the main faces of the revamp. This time too we both are getting together on the same channel and more interestingly on the same show!"

The promos for the show will be shot very soon and the launch date is expected to be on 22nd of February.

Albeit Jai looks too boyish.. Hope the pair Clicks..

12 years ago bt original is always better .. lol . OBS is damn original in its concept ! love it soo much

12 years ago OBS is amazing serial! if this works for hindi too it wil b terrific!

12 years ago Hope they recreate the magic of Ogo Badhu Sundori...if they are sucesful it will create a new cult in Hindi TV as well as it did in Bengali Television. Just cant wait for such a serio-comical drams on Tv after a long time. And Jay is good for the role but the original Ishan Rajdeep Gupta rockzzzzz