Veteran writer-lyricist Javed Akhtar and his equally talented actor wife Shabana Azmi have been voted the best couple in Bollywood in an online poll conducted by matrimony portal BharatMatrimony. 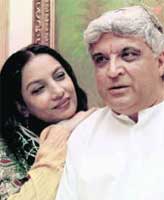 The results came nearly a month after the portal had conducted a survey to find out the 'best power couples' and 'best Bollywood couples' of 2009 as part of Matrimony Day April 14.


The survey involved 20,800 individuals who had cast their vote.


'We conducted this celebrity poll on Matrimony Day to highlight happy couples to generate interest among our most relevant audience to experience the joy of togetherness,' said Murugavel Janakiraman, founder and CEO of BharatMatrimony.