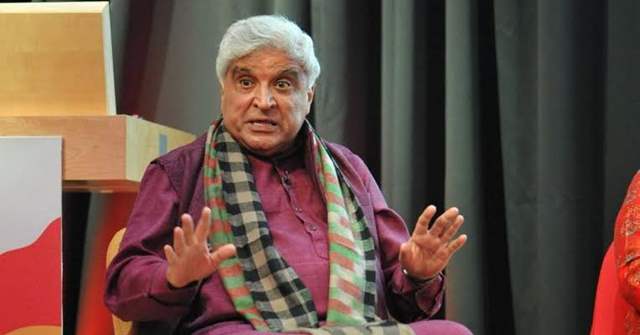 Famous lyricist Javed Akhtar has expressed displeasure over the attitude of world leaders and countries towards Taliban.

Javed Akhtar said that it is a matter of shame that so-called civilized and democratic countries are ready to join hands with the Taliban.

He urged all countries not to recognize the Taliban. Javed Akhtar has said these things through tweets.

Furious over joining hands with Taliban, Javed Akhtar tweets that, 'every liberal person, every democratic government, every civilized society in the world should refuse to recognize and condemn Talibanis for their brutal oppression of women or else use words like justice, humanity and conscience. Must be forgotten.'

In his next tweet, Javed Akhtar criticized the Taliban spokesperson's statement that women are meant to have children, not to become ministers.

Javed Akhtar writes that, 'the Taliban spokesman told the world that women are not meant to be ministers but to stay at home and have children, but the so-called civilized and democratic countries of the world are ready to join hands with the Taliban. , It's a shame.' 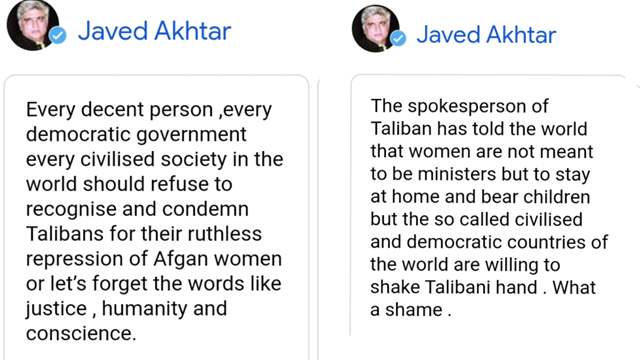 Let us tell you that the spokesman of the Taliban, Syed Zakirullah Hashmi, made a shameful statement about women.

When Hashmi was asked why women were not given a place in the Taliban government, he replied that, 'women's job is only to have children, they cannot become ministers'.

The Taliban spokesperson also said that, 'making women ministers is a noose around their necks that they cannot handle'.

At the same time, regarding the women's protests, Hashmi had said that these are some women and they do not represent all women of Afghanistan.

Earlier, speaking to NDTV, Javed Akhtar had said that, 'the right wing all over the world want the same things'. These people are of the same mentality.' He further says, 'Of course Taliban is barbaric and their actions are condemnable but those who are supporting RSS, VHP and Bajrang Dal are all the same.'

1 months ago Mind your own business old man! Let them run their country their way. Luntic indians always concerned about other countries.