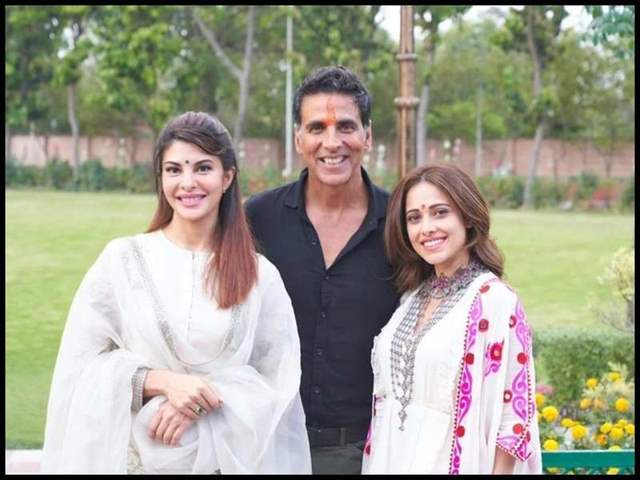 Jacqueline Fernandez made most of her mahurat day in Ayodhya, find out what all she did in the city

Jacqueline Fernandez recently flew to Ayodhya for the mahurat of her upcoming film Ram Setu with Akshay Kumar and Nushrratt Bharuccha. The team shared pictures from the mahurat where Jacqueline looked beautiful in a traditional attire wearing an off white kurta with matching palazzos printed with flowers and a plain white dupatta as she completed the gorgeous Indian look with a black bindi and a basic makeup look.

I enjoy exploring Indian culture and it's diversity. People of many religion coexist here and each has its own tradition which is so interesting. My profession takes me to different parts of the country where I get opportunities to learn about social norms and heritage.

Through the day, Jacqueline and the whole cast treated fans with insights of the mahurat day on their social media.

A source close to Jacqueline shared,

During the mahurat, they got time to explore Ayodhya and the culture there and Jacqueline made the most of it. The first thing she did was buy the native Chikankari kurtis and suits.Though Jacqueline is very certain about her diet and never misses it, she couldn't resist the local food and the chaats. She had the samosa chaat, the biryani and other different types of sweets and savoury food. When the mahurat was happening, there were lots of local people that came around so Jacqueline interacted with them about their culture and traditions and just had a great time exploring the city.

Also during her shoot for Bachchan Pandey in Jaisalmer she made the most of her time there to explore the Rajasthani culture and food as well. She was seen dancing with the native people and eating their local food with lots of enthusiasm.

Jacqueline will be collaborating with co-star Akshay Kumar fo the 5th time with this film which is inspired from Indian mythology and history. Akshay and her will also be seen together in Bachchan Pandey in completely different avatars. The two seem to share a great camaraderie not just on-screen but also off-screen.

Fernandez has been super busy since the start of the year with multiple projects in her kitty including, Bachchan Pandey, Bhoot Police, Cirkus, Kick 2 as well as Ram Setu.