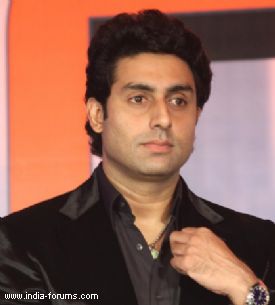 Actor Abhishek Bachchan says he has never seen his father Amitabh Bachchan's 1975 hit film "Sholay" in theatres. He is excited to catch its 3D version on the silver screen next year.

"I am very excited to see it on the big screen. I have seen Sholay 100 times on TV and DVD, but never seen it onscreen. So, I am super excited about it," Abhishek told IANS.

"I had gone for the premiere of 'Sholay' inside my mum's stomach. She was pregnant with me, but it's shocking I have never seen 'Sholay' onscreen," added the son of veteran actress Jaya Bachchan.

He says he had asked filmmaker Rohan Sippy, son of the Hindi classic movie's director Ramesh Sippy, to release it again during its 25th anniversary.

"I asked my friend Rohan when 'Sholay' was about to complete 25 years - 'Why don't you digitally re-master it and re-release it?'. There were few issues with the rights and we couldn't do it," said Abhishek.