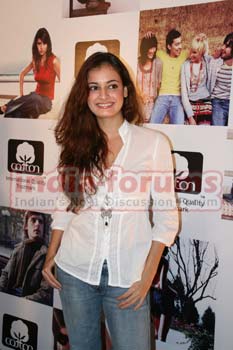 Dia Mirza is unperturbed about the fact that she has no films after her just released 'Hum, Tum Aur Ghost' because she says she would rather wait for good films than do unsatisfying work.

'I'm not doing anything after 'Hum Tum Aur Ghost'. If this was the situation five years ago, I would have got so worried and this fact would have killed me; it would have bothered me no end,' Dia told IANS in an interview.

Dia, who won the Miss Asia Pacific beauty pageant in 2000, made her cinematic debut with 'Rehnaa Hai Terre Dil Mein' opposite R. Madhavan in 2001. Later she did films like 'Tumsa Nahin Dekha', 'Deewaanapan', 'Parineeta', 'Dus', 'Fight Club', and 'Lage Raho Munnabhai' among others.

Before 'Hum, Tum Aur Ghost' that released March 26, the 28-year-old has mostly been seen in ensemble casts or special appearances in films for quite some time now.

The actress now, however, feels differently: 'It's quality over quantity for me now.'

'For the longest time, I have been getting offers in films that I didn't want to be a part of. Even though they were lead roles they weren't something that my sensibilities could connect with,' she said.

'When you work for nine years you reach a stage when you don't really want to push the buttons any more. You just want to do things that excite you, motivate you and make you go to work the next day,' she added.

'I'd rather come in a good film after three years than do a film every year that I don't relate to. Script really matters,' she added.

In 'Hum, Tum Aur Ghost', where she is paired opposite Arshad Warsi, who is also the producer of the film, Dia played the female lead after many years.

Asked whether she would like to follow the footsteps of other actors in the industry and get into production, the model-turned-actress replied: 'All my friends are pushing me to get into production and direction. I'm not ready for it right now. Let's see how things shape up,' Dia said.