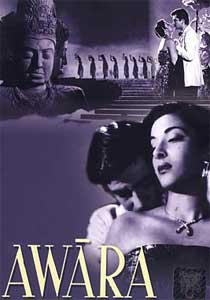 Randhir Kapoor says he is not interested in remaking his father Raj Kapoor's 1951 classic 'Awara' as it would be impossible to find actors of the same calibre that the film's original cast had.

'Many people came to me and my brothers (Rishi and Rajiv) and asked why don't we remake 'Awara'. I told them that it is absolutely impossible to imitate the classic 'Awara' which is loved so much till today,' Randhir told reporters at the launch of the book 'The Dialogue of Awara; Raj Kapoor's Immortal Classic'.

'Where will I get Prithviraj Kapoor, Raj Kapoor, Nargisji and where will I get that innocent looking Shashi Kapoor? I would be making a fool of myself by trying to imitate the film because I won't have actors of that calibre again, even if I copy it frame by frame,' he added.

Raj Kapoor was only 27 when he made 'Awara'. Released in 1951, it became one of the most successful films in his career.

'The Dialogue of Awara...' has the original story, dialogues and screenplay along with the screen shots of the movie.

'When Nasreen Munni Kabir approached me with the idea to transform this great film into a book, I got very excited as it's one of my favourite films ever. I discussed it with my brothers and they were also very keen to bring this film in book form for today's generation to see, read and understand what 'Awara' was all about,' said Randhir.

Thanking the Kapoor family, Kabir said: 'I'm extremely thankful to the Kapoor family. Without their support this wouldn't have been possible. It's by continuously finding new ways to talk about iconic films, we can keep them alive. A book is a way of keeping record of a film in a different way.'

Rishi Kapoor was also present at the event.

Gurmeet Choudhary and Debina Bonnerjee test positive for ...
a minute ago

exclusive
Exclusive Saqib Saleem: It breaks my heart to see Bollywood's ...
42 minutes ago

Bhumi Pednekar admits being Intimidated by Ranveer Singh; ...
44 minutes ago