Based on the real life events of the estrangement between North Indians and Mumbaikers, from the October 27th 2008 act on the Kalyan Rail Station wherein a few young guys were severely beaten up, the movie 322 Mumbai to India traces the story of a youth namely Rahul Raj hijacking a certain bus #332, to prove his point. Based upon the non-fictional instance of animosity between the UPites in Mumbai, and the local Mumbaikers, this movie then delves into the after math and consequences faced by common man from either state in the city of dreams, post the terror of the bus hijack. In sequence the movie traces the life and stories of various characters who eventually come to be linked in a life is a circle manner to wrap up the movie.

The idea is to depict the disruption in the life of a common man owing to such inconsiderate and uncivil indulging on the part of furious youth. 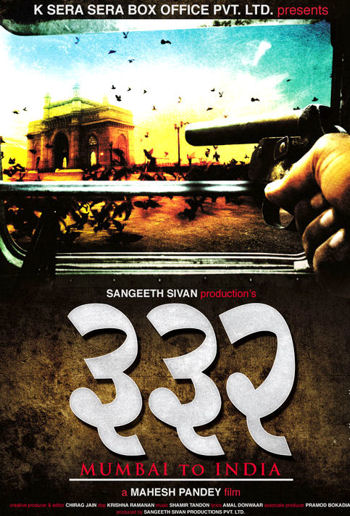 Disha Salian did not dial 100 before her death, says Mumbai ...
21 minutes ago

Nishant Malkani: I may not agree with everything Kangana ...
44 minutes ago

What was Ranveer Singh doing at YRF Studio? Close Source ...
51 minutes ago