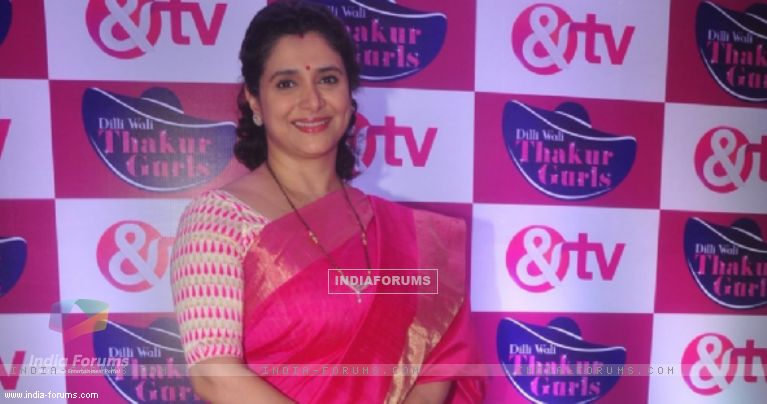 Seasoned actress Supriya Pilgaonkar, who is known for her exceptional performance in various shows, is back on screen with a promising character this time. supriya, who was last seen in Meri Bhabhi on Star Plus, will be seen in the new show Dilli Wali Thakur Gurls on & TV.

We ask Supriya, about her character, expectations and more...

Tell us something about your character in the show...

your previous shows have been praised by the audience, so what are your expectations from this show?

I am expecting the same kind of love because this is also as real as Radha from Radhaa Ki Betiyaan Kuch Kar Dikhayengi, Sheleja from Sasuraal Genda Phool and Amrit from Ek Nanad Ki Khushiyon Ki Chaabi...Meri Bhabhi.

So as an actor, I put in my 100% because I love doing my work and that is what comes across, I feel it is appreciated because I genuinely like to play that character which is offered to me and I try to get into skin of that character.

I don't just read out the same lines given to me, I do lot of variations instead of just mugging up the lines. I just soak it in, I spend a day and before going to sleep I unwind all the things that I do in the entire day. Only when I am sleeping I don't think about work, this is how I end my day. So, I think it pays off by getting connected with the people through your work and efforts.

You are playing the mother to five daughters in the show, so how does it feel to be the mother of so many daughters?

They are handful but they all are very sweet, lovely and they have their own characteristics. There is lots of help at home as well because bacchiyon so jyada kaam karwati hu unse (laughs). So, I am happy that I have five daughters in the show. I am really happy being the mother of five daughters because daughters are more caring like I have a caring daughter in real life.

Do you relate your reel life character with your real life?

Yes, I do because there are a lot of similarities. I realized that every time I play a character, I start believing that I am in that character. So, this time again the same thing because here when I read my scenes, I see myself. The way I would react in real life are the same things written in my script. Previously it was not like that because I was bound with some past story but in this show Dilli Wali Thakur Gurls, I don't have any past story. I am just being myself in the show and enjoying.

TellyBuzz wishes Supriya Pilgaonkar all the best for the show.

6 years ago nice interview ..waiting for the show..I like her very much..

6 years ago nice interview ..waiting for the show..I like her very much..

6 years ago Lovely interview.Thanks TB.
It's nice to know how she prepares for the characters because I can't forget her performances in Radha Ki Betiyaan and Sasural Genda Phool in a long time.
One of my most fav actor and might give this show a try for Supriyaji.