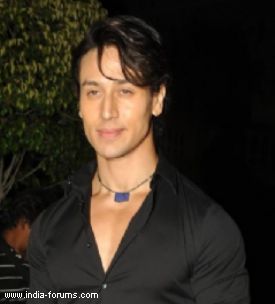 Tiger Shroff is eagerly waiting for his debut film "Heropanti" to hit the screens May 23 and he is happy yet nervous as "Kochadaiyaan", featuring his dad Jackie Shroff as a villain, will release the same day.

The 24-year-old is already making news for his daring stunts and he says that his hard work has made him secure about "Heropanti".

"My father is also in that movie (superstar Rajinikanth starrer 'Kochadaiyaan'). He (Jackie) is a villain in that movie. It will be father-son competition on May 23.

"I am nervous about both actors acting in 'Kochadaiiyaan', but I have worked so hard so I am secure about 'Heropanti' and happy to show the audience what we have done and what we have accomplished," Tiger, who started preparing for his role since he signed the movie in June 2012, told IANS.

The newcomer's fate is still uncertain but he believes he has made an "impact", thanks to Twitter jokes on him.

"One day I came across a news that read Tiger Shroff trending on Twitter. I thought how fast and already famous. I clicked and saw people making fun on my name. I laughed reading them," he said.

"If you are being talked about already at this stage that means somehow or the other you have made an impact already. Publicity is publicity - good or bad. If no one was talking about me, it would've been something to worry about. But I am clear I have made an impact," he added.

His clean shaven face and hair reaching his eyebrows are also talked about, but he says it's talent that matters more than looks.

"I want the audience to accept who I am. I want to show them who I really am. If you don't like me, I'll try and change but I am sincere and honest to my work and I want that to come across. Looks are secondary. I want to prove my talent," said Tiger, who doesn't mind taking classes to be a better dancer, actor and performer.

Currently on a multi-city tour to promote his film, the devotee of Lord Shiva is excited about his maiden visit to Varanasi a day before the city goes to the polls.

"The experience has been superb. People are lovely. The city is the oldest and it's a spiritual city and I am a spiritual person. That's why I chose to come here and pay my respects to Lord Shiva. I am a follower of Shivji. That's why I am here.

"This morning (Sunday) I woke up early to go to Tulsi Ghat to experience the whole energy and exercise there," said the actor, who will also travel to Delhi, Punjab and Nagpur for Sabbir Khan's directorial's promotion.