Madhuri Dixit, the 'Dancing Diva' tested the dancing skills of the Nach Baliye contestants, as they danced solo for the 'Aaja Nachle' contest conducted by the gorgeous lady. Madhuri, who was moved by the performances of Barkha, Sanjeeda, Abhishek and Krushna decided to select these four contestants for the final round. 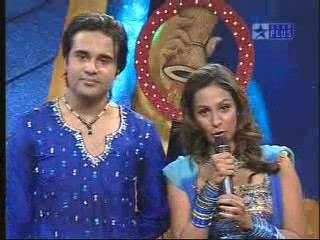 Featured Video
And at last, it was Krushna who bagged the “Aaja Nachle” title and was named the “Best Dancer” of Nach Baliye. Madhuri presented Krushna with an idol of God “Natraj” which came as a boon to both Kashmera and Krushna. Kashmera and Krushna were thrilled and are very happy that their hard work paid off.

When asked Kashmera on how she felt when her Baliye received this award, she exclaimed, “Krushna won the Natraj from Madhuri, what more do I want? I am elated”. Kash remembers the sweet words that Madhuri had for Krushna. “For a woman to dance like a woman is understood, but for a man to entice and groove like this, without looking vulgar and cheap is absolutely marvelous”, was exactly what Madhuri had to say,says Kash.

An equally thrilled Krushna says, “My mama Govinda is a brilliant dancer, and if getting applauded by him means a lot to me, then I would say that the pinnacle of success to me is to get the 'Natraj' from the gorgeous Dancing Diva, Madhuri Dixit and being called the 'Best Dancer in Nach Baliye'. It is a dream come true”.

Krushna has always been praised by both the judges and audience and now getting the title of “Best Dancer” from the dancing diva herself should definitely make him feel on cloud nine.

14 years ago well like people before me have pointed out..

jab we met is also going crazy at the cinemas...

+ 4
14 years ago these ppl missed out on so many movies..
and from what i know ...bhool bhulaiya did really well...in first week itself it earned over 25 crores...wonder hows its a flop...partner is mentioned no where..it was a huge hit...

chak de india would have been a flop too...they should thank the indian teams (hockey, football and T20 cricket)...due to these teams' victories the movie did well...

i am sure oso and saawariya will do really good...so will aaja nachle...main reason being madhuri there....goal looks good as well

14 years ago What happened to Partner, AKS, JWM? I thought Partner was one of the highest grossers!

+ 2
14 years ago FYI Heyy Babyy & Bhool Bhulaiya are blockbusters & on a record-breaking spree....

neha294 14 years ago U are absolutely wrong.....Hey baby,bhool bhoolaiya and partner are also superhits and heading towards becoming a blockbuster.Even dhol and dhamaal are hits..i think whoever has written this article is not updated.Plz go and see boxofficeindia.com........What are u upto?We cannot believe anythinng wrong u say........First research properly and then write an article....

14 years ago Umm wat abt patner?? U didnt mention dat.. It was one of the biggest hits of the yr also