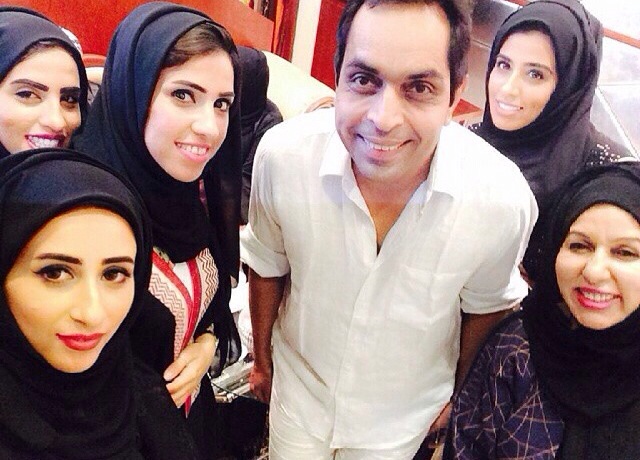 Proficient and versatile actor Vishwajeet Pradhan who was recently seen portraying an eunuch's character in Life OK's Ek Boond Ishq. While he has been applauded by the masses for his performance in TV too, he has made a mark in films as well.

It feels nice and extremely delightful when an actor's work is well recognized and appreciated by the masses from the overseas.

Vishwajeet Pradhan who is currently busy working on his international film 'Positive' and upcoming Bollywood flick "Wah Taj' recently went to Dubai to support his lovely wife Sonalika Pradhan who is a fashion designer by profession. Sonalika had organized a fashion event in Dubai.

Vishwajeet's happiness knew no bounds when he got an opportunity to met the begums of Dubai and he was thrilled to know that the viewers admirer his acting skills right from his first daily soap Maryaada Lekin Kab Tak?

The actor was even more amused when he learnt that they knew a few dialogues of his character.

Commenting on this Vishwajeet says, "It was great to meet Dubai begums, the surprising part was that they have seen my shows and even were knowing my signature dialogues from Maryada. It always feels great when your work gets recognized."

"I have always been passionate about doing films," says actress Donal ...

All the very best for your upcoming future

6 years ago vishwajeet Pradhan sir was phenomenal in ek boond ishq not only playing a character with duo identity,but duo gender (a eunuch), he is such a versatile actor, who has carried out his each and every role be it a antagonist or vice versa to perfection,his deffo one of the best this industry has.

+ 2
6 years ago Vishwajeet Pradhan sir is a fabulous actor and his character Kalavati will stay in our heart for forever. . .such a great artist... :)
Love Ek boond ishq...
We want season 2...!!!

+ 4
9 years ago Awww thats so sweet! Yes they did the right job casting her because she looked apt for the role.

9 years ago thanks for article!!!

Shahid kapoor is a great actor.I do like sonam kapoor too... but not as in couple...
I like Shahid kapoor and Amrita Rao the best of the couple. I want to see Amrita and Shahid together in more film again.

and i like Sonam with Ranbir Kapoor the couple. i also want to see their together in more film too.

+ 5
9 years ago wow...shahid and prachi..!! that would be a cute pari to watch..and you guys say he's been single since 2007 after brekaing up with Kareena..yet it was IF who kept reporting about his link ups with Priyanka Chopra..make up your mind will you..lolxx..