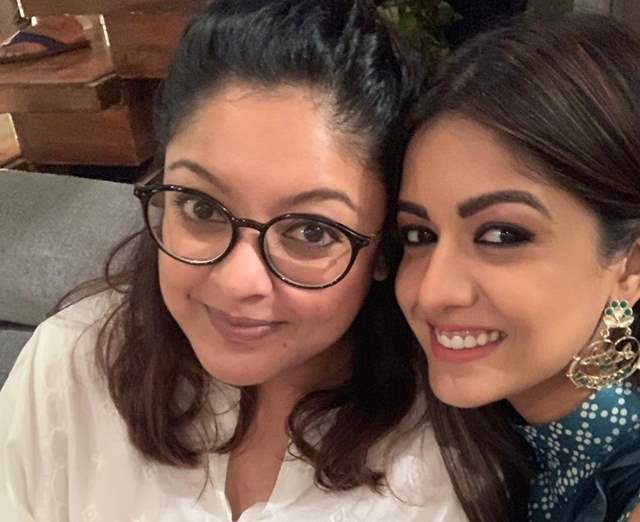 Ishita Dutta who is currently seen in Colors "Bepanah Pyaar had  a surprise visitor on set yesterday and It was none other than her older sister Ex-Miss India and Bollywood actress Tanushree Dutta. Ishita was super excited to see Tanushree on her shooting set and they both had a gala time hanging out with her unit members and co-star Pearl V Puri between shots.

We spoke to Ishita and here is what she has to say, " Di had moved to the  US a few years ago and hence was unable to visit me on my shooting sets. It was the first time she saw me performing in front of the camera". "She was super happy and was childlike to visit my shooting set after such a long time, I was so happy to see didi having a great time. The whole unit was also delighted to have her there and made sure she felt at ease."

Ishita signs off by saying " Tanushree had taught me how to do makeup when I didn't even know how to hold a brush, She encouraged me to go to acting school when i was not confident about my personality and acting. She even got my pictures done from the best photographers in town. She motivated me to do my best, Today I'm working for one of the biggest film and TV production house in town. Many don't know that my sister has silently been my backbone all these years".

We can say that's a major sister goals here and can say that happier seeing the two lovelies together on set.

Naagin 5: Surbhi Chandna to have twin sisters in Ekta ...
18 minutes ago

5 Reasons why the upcoming episode of Roadies Revolution ...
20 minutes ago

Breaking
Breaking After Erica Fernandes and Aamna Shariff, Parth Samthaan to ...
39 minutes ago

Riteish Deshmukh calls wife Genelia, "My Everything" as he ...
45 minutes ago