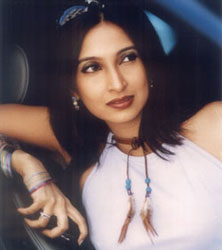 Amita Chandekar is quite tired of the constant media speculation regarding her "relationship" with Karan Patel. "I don't want to discuss my private life with anybody," she says.

A source told Telly Buzz that that the couple was indeed together, till very recently, but a difference in attitude lead to them breaking up. Karan is always in hurry while Amita likes things more organized. If you would remember the press reports that spoke of the differences between the couple soon after the Jodi list in Nach Baliye was announced, this was exactly when all problems began. Things soon reached a point of no return by the 5th episode of the Star Plus reality show, and they decided to call it quits. However, the duo decided to stay together publicly until Nach wrapped up.

The khabru goes on to say that the Kasturi vamp is quite hurt that Karan is denying the relationship that once existed between them. Amita feels that by speaking to press that they they were never together, Karan is only contradicting himself, as he had publicly accepted their relationship by agreeing to be a part of Nach in the first place. Amita has some good memories of their time together and does not want to sully the matter further by responding in kind to such comments, ended the source.

14 years ago ohhhhhhhhhhh thats sad thnx for the article

+ 5
14 years ago gosh!!!! its hard to understand these actors sometimes

14 years ago the blame should go to karan and amita. cannot really blame channel or audiences here. K-A gave interviews abt how they met, how he proposed, how much they love each other bla bla now this sudden change after the show is over. very wrong thing done by K-A

+ 2
14 years ago another case of washing dirty linen in public.

14 years ago Can it be true that they never a couple as karan is alluding! if so it very cheap and star should be held responsible for wrong selection

+ 4
14 years ago i never liked their pair & karan-amita why tehy have participated in nach baliye when tehy were not so sure of their relationship !!

only married pairs shud be allowed to participate in nach baliye & amita was not a good dancer so karan was a bit ashamed of tht fact !!!
i like karan a lot !! but never l;iked amita !!

14 years ago he is Robbie from Kasturi...n he and amita recently participated in nach baliye 3..
I feel sorry for amita..but in a way its good they realized now than repenting later.