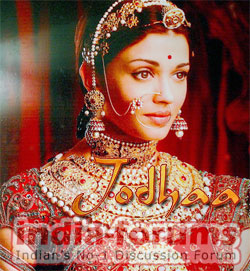 New Delhi, Dec 19 (IANS) Is there a Salim on the way? Actress Aishwarya Rai, Jodha Bai of the period epic 'Jodhaa-Akbar', is 'enjoying the speculation' about her pregnancy in the media. And she refuses to rise to the bait.

'If I walk too carefully or if I stand with dupatta draped on one side, the media will be rife with speculation the next day. So I am myself, going along with the flow,' said the chirpy former Miss World-turned-actress shimmering in a cloud of green chiffon and diamonds.

She was in the capital to unveil a new collection of Nakshatra diamond jewellery, a brand she represents.

She is not even threatened by the return of Madhuri Dixit in 'Aaja Nachle'. 'Have you watched 'Devdas'?' Aishwarya shot back when asked how did she take the former superstar's comeback.

Aishwarya is comfortable in her new role.

'This new phase of my life, as Abhishek's (Bachchan) wife, has been special. I have another set of parents in Amit (Amitabh Bachchan) and Jayaji. The goodwill of the media and the people in general also has mattered,' the actress said.

The actress is full of memories of 'Jodhaa-Akbar'.

'It is a director's film all the way. Ashutosh Gowariker is a committed filmmaker and for me it was another project that I enjoyed. The choice was between two films and Ashutosh was undecided which one he would make first. Then he messaged me one day saying will you be my Jodha. I said why not?' recalls Aishwarya.

There is no special connect on the part of Aishwarya with Jodha Bai, emperor Akbar's favourite Hindu queen, whose identity is still a mystery.

'Ashutosh is not here to give a lesson in history. He
Featured Video 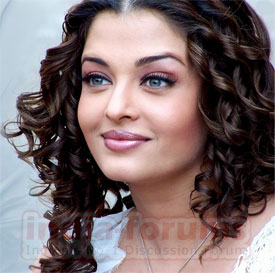 just made a movie on the moving love story between Jalaluddin Akbar and Jodha Bai. It is an inspiring story. They were two people, who had an arranged inter-religion marriage despite the fact that they came from different backgrounds,' she clarified.

The only aspect of Jodha Bai the actress identifies with is her 'silence'. 'She made her presence felt through her silence and spoke only when she wanted to make herself heard,' Aishwarya said.

Speaking about love for diamonds and accessories, she said: 'Diamonds were to a woman what cars were to men.'

The actress is nostalgic about her first diamond. 'I got it from my father. It was a diamond ring which belonged to my grandmother.'

The rest of the diamonds she acquired along the way 'with experience and they have been priceless'.