View Profile
You worked as Casting Director in Films like Monsoon Wedding, Vanity Fair, the Terminal, Brick Lane. Now Director Danny Boyle's Slumdog Millionaire is in the line. How 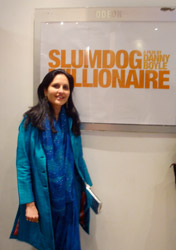 Featured Video
did you get into this film?

I was approached by Tabrez Noorani, the line producer of SDM from LA, and he set up a meeting between me and the producer of SDM, Christian Colson for casting the film.  They were familiar with my work and wanted me to get involved. I loved the script…it reminded me of the fantastic Salim –Javed characters from the 70's…and the fact that Danny Boyle had agreed to direct it, made it a very interesting prospect for me. I came on board within a day of reading the script.


Apart from spotting Freida Pinto & casting her in Slumdog Millionaire, what makes casting for this film special?

It's the most unusual casting ever.  I had the best time looking for  three characters (Jamal, Salim and Latika) in three age groups…so 9 people play 3 parts and all with almost equal screen time. So you see three 6 year old Bombay slum kids grow into 12 year olds and then 18 year olds. We found Dev Patel, the eldest Jamal, in London. Freida Pinto and Madhur Mittal are the eldest versions of Latika and Salim who we found right here in Mumbai…and I'm really proud of their work in the film. And of the 9, two are real slum kids and most of the others, are first timers in film. Apart from these nine heroes of the script, I was thrilled to bring on board some of the most amazing talent from our industry – Anil Kapoor, Irrfan Khan, Mahesh Manjrekar, Saurabh Shukla and Ankur Vikal. All greats…. and they've made me look so good!


In the Previous films you worked as Casting Director. How did you get into Co-Directing in this Film?

I've never looked at Casting as a "career", the reason why I don't do everything that comes my way…. I've always seen it as a movement towards directing my own films. Casting has allowed me to work with directors whose work I admire, and to learn the most vital element of filmmaking – working with actors. When I started casting Slumdog, I suggested to Danny and Simon Beaufoy, the writer of Slumdog, that it was important to do some of it in Hindi to bring the film alive (One third of the film is in Hindi). They asked me to pen the Hindi dialogues which I, of course, instantly agreed to do. And as we drew closer to the shoot date, Danny asked me to step in as the Co-Director. It was, and always will be, the honor of a lifetime for me to work alongside a visionary genius like Boyle.


How did you select the lead characters of the film 'Slumdog Millionaire'? How was the experience?

It was a phenomenal experience! I started casting the film in April 2007 and I think I must've been casting till the last day of shoot early this year – that's the number of characters in this film! But I have to say searching for the three key players in three different age groups, particularly at 6 and 12 years, was the most challenging part. They had to feel alike in so many ways but more than anything, in spirit. 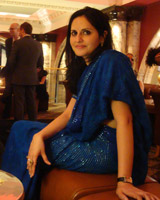 How Indian is "Slumdog Millionaire"?

For me, it's fully and totally Indian! It's set here, it's about our world and it feels "apna". I think a lot of it comes from the fact that Danny embraced the script in a complete way. He wanted to tell the story as an insider. And I think he has succeeded in a way that's inspiring to all of us in the film world who fear doing anything outside our familiar comfort zones.


How was working with Danny Boyle in "Slumdog Millionaire"?

Like I just said, working with Danny Boyle has been truly inspiring. His energy is infectious and brings out the best in everyone around him. I've had an amazing fortune of being able to learn from a master. I sometimes feel like I'm the off-screen "millionaire" to come out of Slumdog Millionaire – I feel so enriched from this experience!