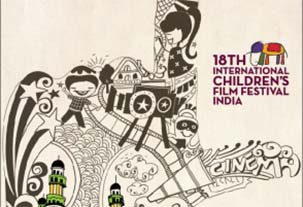 The seven-day festival is being organised by the information and broadcasting ministry, Children's Film Society, India (CFSI) and the Andhra Pradesh state government.

Also known as the Golden Elephant, the festival was inaugurated by noted lyricist-writer-filmmaker Gulzar, actor Ranbir Kapoor and CFSI CEO Shravan Kumar, before the opening ceremony.

"This is the 10th edition in Hyderabad. We've been organising it in the city since 1995. This time the festival will offer movies superior in content and better quality of projection. Our focus is also on children with special needs," Kumar said during the inauguration.

Gulzar was happy that the festival was back in the city, but said he wants the biennial event to be hosted more frequently and in other parts of the country too.

"It is good to know that it happens here, but it should happen every year and not just in one place. It should take place in different states. Northeast is difficult to reach, so one way to do that is through media," said the lyricist, who has penned lines for the signature video of the festival.

He said at present the number of children's films made in India don't have impressive figures.

"There are less movies for children and no theatres (for children) which used to be there earlier. There used to be morning shows at theatres," said Gulzar.

Ranbir, who has featured in a song of children's film "Chillar Party", considers the festival to be the right platform for entertainment and education.

Later, he also shook a leg with child stars Darsheel Safary and Saloni Daini, who hosted the opening ceremony of the festival.

Many local people -- school children, families and other participants of the fest -- turned up in large numbers.

When Andhra Pradesh Chief Minister Kiran Kumar Reddy made an announcement related to the infrastructure of the festival, the audience couldn't stop applauding.

"It is a pleasure to make Hyderabad the host of the International Children's Film Festival, India and we are trying to make permanent infrastructure for it here," said Reddy.

Tewari called for ostracizing from mainstream of human thought totalitarianism, fascism and all such sectarian mindset which squeeze the liberal spaces in the world.

There were also classical dance performances by children of various age groups. Children with disabilities also wowed the audience with their dance moves even if most of them took support of wheelchairs.

The event concluded with screening of "Gopi Gawaiyya Bagha Baiyaya".

The festival received 896 entries from 74 countries. They include 123 entries under the Little Directors section.

Movies sourced from the Cannes Film Market and other international award winning films would be screened. There will be 30 shows daily.

A total of 16 awards in four categories would be given away in the competition section. For the first time, the animation features category has been included.

The Czech Republic, the country in focus, will present 15 of its best children's films in the non-competitive section, while the Children's World would present 85 award winning international and national films from the last decade.

For the first time, the ICFFI received 26 films from South America.

An estimated 1.5 lakh children are expected to view 200 films from 48 countries during the festival.