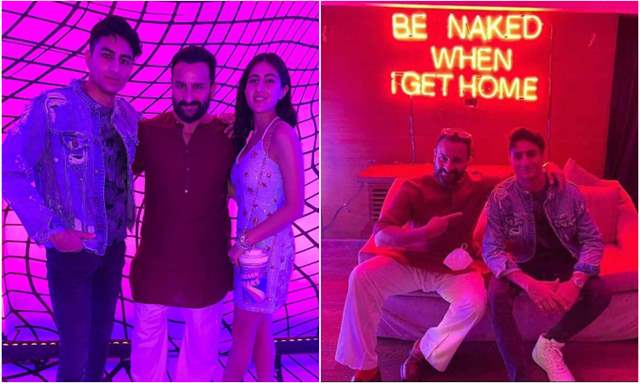 Saif Ali Khan and Amrita Singh’s son Ibrahim Ali Khan recently turned 20 and a grand birthday bash was hosted for him. The bash was held at Saif-Kareena’s old residence, and the actor completely transformed it into a party venue.

A picture of Ibrahim posing with father Saif has surfaced online and it has left his fans eager for more pictures. Now, more pictures from this one of a kind birthday bash have made it to the internet.

The party planners and decorators shared photos and videos of the house on Sunday and how they turned Saif’s old house into a woozy-psychedelic looking party. The pictures featured large rooms and hallways, getting covered in slick pink and blue lights, graphic projections, customised posters on the walls, a neon style bar, a graffiti mirror and more.

Ibrahim arrived at the party venue with his sister Sara Ali Khan and she even posted a few pictures from the birthday party featuring Saif and Ibrahim. "Daddy’s Day Out #likefatherlikeson #carboncopy," read Sara’s caption.

Sara wore a short grey dress while Ibrahim wore a denim jacket and blue pants. The jacket had 'birthday boy' embossed in red on the back of it.

Sara Ali Khan requests paparazzi to ‘not come any closer’ and maintain ...