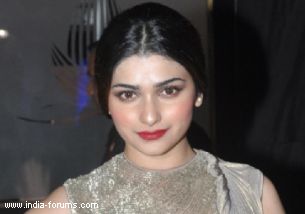 Actress Prachi Desai put her professionalism on display when she decided to postpone a surgery and shot for an item song for "Ek Villain".

Prachi, who features in the "Awari" track in the film, was advised to go through a tooth extraction surgery at the earliest possible, but she chose to wait till her song rehearsals, look test and shoot was over.

"She had been in pain for two weeks but could only make do with pain killers for a song shoot for Mohit Suri's film," said a source.

"It had caused her much of discomfort but fulfilling her commitment was more important to her," the source added.

Not just this! The actress also faced a bleeding knee during the shoot of the song.

A source from the set says there were some high octane shots where Prachi and the girls had to fall on their knees and slide backwards. That caused them to suffer some bruises on their feet and knees.

Now all is well.

"Prachi's procedure is done... she will be fine in a few days," the source said.